I've already reviewed this tea, a Thai Jin Xuan based black tea, sold by the Tea Side vendor.  The point here is to compare my own impression of it from now and when I tried an earlier sample that vendor sent, about nine months ago, in this post (the time just flies).  I liked the tea so much I ordered 200 grams of it, to have a nice daily drinking tea around.  That just took time; I tend to get side-tracked, as on that Indonesian teas tangent.


The trigger for finally buying a version was trying an aged 21 year old Thai oolong from Tea Side a few posts back, which I really loved, the kind of tea that might not be around to order in the future (with another Steep Stories review of the same tea here, with nicer story telling).  I'll have more to say about the teas, including a Thai hei cha I liked and bought a cake of (and already reviewed, the 0801 HTC 2006 sheng; would seem a bit repetitive to keep repeating posts about identical teas), and a sample of an hei cha from Myanmar that sounded interesting.

I could see why I loved the tea from the smell; lots of floral character, sweetness, a richness that almost smells like a red wine component.  The brewed version was nice too, but it was a little different than I remembered it.  It is a soft, sweet version of a black tea, with those elements, floral aspects, maybe some cocoa, malt, and a bit of bread dough, a slight yeastiness.  It sounds like some sort of cobbler, doesn't it?  I didn't remember that last part as being as much of a factor.  I like the tea, and it doesn't really detract from it, but it seems possible I really loved that general effect a year or year and a half ago and I'm sort of moving on from there.


Why would I say that?  The Vietnamese oolong Red Buffalo was the same, in a lot of ways.  I loved the tea, the softness, full flavors, malt and cocoa aspects, and also fruit and spice components, but the bread dough / yeast aspect would really be a make-or-break for someone to love the tea or not.  I think I loved it more initially, then still liked it a lot when I bought a lot of it (a kilogram; some extra to give away), but I was less in love with it the second time.

I think this will be a perfect tea for giving away too, a type that would serve well as an introductory tea, although I still like it enough it will be hard to part with much of it.  All the same I did give away samples already, to three people at work, and they liked it, so that worked out.  I'll keep at least half to drink so I won't feel shorted.  It is perfect for a tea that you drink when you don't really want to challenge yourself to make or drink some incredible tea, just as something nice with a breakfast or afternoon break. 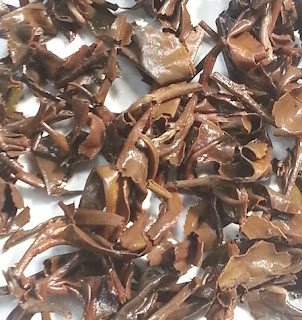 A related tangent, about everyday teas:  I deviated into an Earl Grey drinking tangent recently related to that, which I'd been considering mentioning, but didn't.  I bought a Cordon Bleu version on sale (the French cooking training school brand), and I'd bought some of a Twinings version (which I did mention here).


A blog-post comparison might have worked, but it was hard to take Earl Grey seriously enough to do that, and there was no real story.  The Twinings version had a floral component added, and the other straight bergamot, so they were just different.  The Cordon Bleu version was right at the limit of too much bergamot, the perfect balance point, to me.  Standard-recipe Earl Grey is the way to go, for sure; hold the flowers.


A lot of the point was trying to see if my description of an identical tea changed.  Related to that, I reviewed the tea last year here, with this description:


Brewed tea tasted a little more like peach, still plenty sweet, but nice and clean flavored, with a good bit of cocoa and malt, and some cherry as well, with a rich floral nature.  So good complexity across a range of awesome flavors.  It started to hint a bit towards sweet potato, somehow not my favorite taste element in teas, even though I like sweet potato, but didn't have the too-sweet aftertaste that can go along with that sometimes.


Versus this year, no bread dough no yeast mentioned then, this year perhaps a bit lighter on fruit, but still floral with cocoa.  So what changed?


The idea was to test my taste-memory and palate, to write a new review and compare it, but of course there are problems with doing so.  It might well be the next-year's version of the tea, or the last could have been hanging around awhile, not necessarily a bad thing for black tea.  Storage could come into play, and this actually leads into another subject that's been coming up lately, tea aging.


Per the vendor a taste of yeast or bread dough is an indicator of a recently-made tea, and will fade over time.  I can't confirm or deny that based on my own experience or prior knowledge, so just passing that on.  According to discussions with tea vendors it's not just about getting the processing right, and storage, but tea characteristics also relate to growing and harvesting conditions, so how much it rained, or when, could affect a tea from year to year, a lot.


So I really can't say if I was "tasting it wrong" before, and missed a main component, or if not how those other issues came into play, what caused the difference.  I guess it's possible it could be essentially the same but could use a few months or a year to rest (although that line of thinking really isn't familiar to me, related to black teas).  It's not exactly a major flaw in the tea, the one aspect I keep talking about, tasting like bread dough / yeast, but I suppose I did like it less for trading out rich fruit tastes like peach and cherry for that.


Eventually it would be possible to even "outgrow" a taste black teas, but I don't see that coming.  An online friend just mentioned that pu'er drinkers don't drink those for the taste, that drinking tea for taste (flavor) is something one moves on from (an idea I covered in an earlier post about hei cha, a Thai version from Tea Side, go figure).  Obviously I notice some other factors, and mention here when they really come together, but taste still seems like the main aspect of tea, related to where I'm at now in a preference development curve.  Here is a list of other attributes one might appreciate instead in teas, proposed by that friend:

I don't have much to add related to those, but here is a nice reference explaining some of them, of course related to pu'er.  In that other post of mine I reviewed ideas from a Tea Addict's Journal post that there is a trend to drink teas for taste, then feel and other aspects, then effect, or qi (roughly summarized).  The last part is interesting since he also tends to claim that most teas have very limited qi effect, which of course lots of people have lots of different takes on.  I'm not so sure I can really notice how caffeine affects me, never mind qi, but maybe I'll get there later.


Dunno, really, the tea seemed a little different.  I was expecting to have missed an attribute or two the first time but it didn't seem to work out like that, although it seems conceivable the same attributes were there, and just shifted a little.  I still like the tea, perhaps just not as much as I had last year.  It could be related to drinking a lot of different black teas, and expectations shifting, or a gradual move away from preference for the type, but then I've been drinking a lot more oolong for a half dozen years now, but I still like interesting black teas.