Back into pu'er!  Based on talking about tea with people online a shop in Kuala Lumpur (Malaysia), Golding, sent some tea samples to try, including this Nan Nuo version; many thanks to them for those.

I'm relatively new to pu'er but not completely new, but as well to clarify that first.  I tried many around three years ago when I found a pu'er shop near my office (what are the odds), JRT Imports.  There is no website to mention; strange, but a street-view link is here, and a Tea Chat discussion of local Bangkok pu'er shops goes into background.  A friend recommended that I try drinking a lot of one type of pu'er, buying and drinking a lot of one cake, to get adjusted to brewing and the general profile.  I did that, finishing a lot of one back then--two and a half years ago?  the time flies--but I got side tracked on other tea types.

The Tea Side vendor sent a good number of Thai hei cha samples last year, but I didn't really make the switch to pu'er then either.  I didn't dislike what I had tried, sheng or shou, or variations from different regions, and it kept coming up a little.  But I tend to explore tea types organically, almost randomly, which led to drinking a little of every other main type instead, from lots of countries (except yellow tea, that's only came up once).  I just bought a 2006 HTC Thai hei cha cake / bing from Tea Side (reviewed in this post), sitting at home now, so maybe I'll do a comparison review of trying the same tea again later.  I tried that idea with a Thai black tea in a recent post, a re-tasting test, but I couldn't pin down year-version variations against review-interpretation changes. 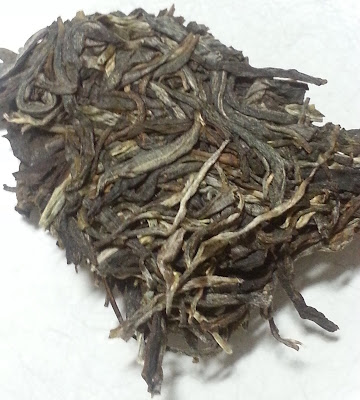 
Even the first rinse was promising; lots of sweetness, interesting mineral tones, not much similarity to taking an aspirin.  The first infusion was more of the same, sweet, lots of mineral, with a hint of smoke, really lots going on.  The general range was familiar, I'd just not been drinking teas in that range for awhile.

Brewing was going to be unfamiliar; still using quite short infusions the taste strengthened a lot due to the tea starting to brew.  In retrospect I'd added too much tea; more on that related to brewing difference description from the second go.

Texture came into play more, of course hard to describe.  At first it seemed like a dryness but really the tea caused a bit of mouth watering, the opposite.  What came across as mineral was really vegetal and mineral, in a kale range, with a little mineral close to chalk.  That might sound awful, or maybe to a pu'er drinker just a normal general range.  The effect was interesting, and it reminded me of a tea drinking friend's comment that people tend not to drink pu'er for taste, or at least there is less necessary connection, less emphasis on that.

With short infusions the tea still brewed light, with sweetness offsetting vegetal / mineral / slight bitterness, with just a hint of smoke.  The tea did cause an aftertaste, but I have no idea about throat feel or taste in the throat, those more exotic properties (more on all that here). 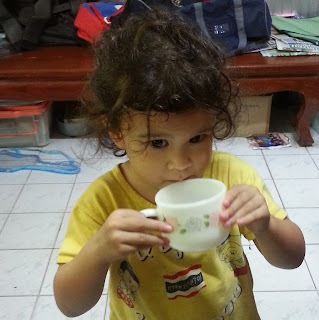 My assistant taster liked it. She said it tastes like flowers.  Either that's a standard answer (I had been drinking some Chrysanthemum in the evenings recently) or she's on to something.  It is a little floral, maybe especially after you drink it, the aftertaste more than the taste.  The scent on the gaiwan lid or in the empty cup includes more honey than I'm noticing during drinking it too.


After more infusions the smoke picked up a little and the honey sweetness became even more noticeable.  The mineral / vegetal / aspirin / sheng taste mellowed a little, and the tea was probably nicer for being more familiar, again.  The aftertaste was kind of different than the taste, related, essentially overlapping, but not as closely connected as is typical with other teas.  It seems to just not go away, to the extent that I wonder if I'm imagining it a few minutes later.


I forgot the tea, interrupted by my kids, and gave it a long infusion; that didn't work.  At lighter strength the taste balance works; I think the floral-related aspect did pick up.  Other aspects are more interesting, the feel, a fullness and juiciness, and the aftertaste, which is pleasant, different. The light smoke seems to come and go, and a very mild bitterness sort of works.


I'm reminded of a recent Dan Cong, with a tartness that could be seen as a flaw or an integral positive aspect that gives the tea a nice balance.  Other tea types, oolongs, blacks, and whites, usually don't really get into much tartness or bitterness, so the challenge of how to interpret them doesn't come up.  A word on this bitterness; it's not astringency, a feel of the tea, but really a subtle taste element, odd to experience.  This could be one aspect people might describe as medicinal but it's really just bitterness.

Brewing parameter variation:  from light to quite light


A friend recommended brewing the tea very lightly, using relatively little of it in proportion to water, in addition to short infusion times, so I tried that.  This was really probably more standard practice; I just hadn't adjusted for the tea type properly, long out of the habit.  It was better, and also just different.

The bitterness essentially didn't come out, and taste range shifted to include some spice, maybe clove.  Clove is nice in tea, although real clove seems to be a complex set of related taste aspects, so this might have been just a part.  Everything evident in the tea was very positive, and there still was plenty of taste left to experience, so it was really more a matter of not being familiar with drinking tea prepared this wispy.  There was still evident aftertaste but issues related to feel sort of dropped out when prepared so lightly; it didn't feel like much. 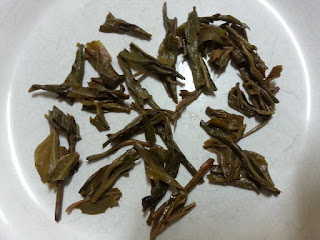 I think there would be a balance point between prepared lightly and very lightly that worked best.  I mentioned in a post not so long ago I'd been drinking plenty of white teas lately, and that I was calibrated for the type, and I think I'm just not for sheng pu'er, related to brewing and drinking the tea, about taste range and brewed strength.


It's my understanding that some people enjoy white teas, particularly Silver Needle style, prepared so lightly that there is barely any taste to experience.  The subtlety--on the sort of getting something level--and feel is more the point, but I'm not one of those people.  I don't need to brew them up to black tea level flavor strength to drink them either, related to some people using really long steep times, but I tend to like having more going on with aspects in Bai Mu Dan style white teas anyway.  But then I've been drinking an interesting Ceylon Bai Mu Dan lately that you don't really taste as much as sense in some general way, even brewed stronger, and that's turned out to be a cool experience.

My impression is that it's a better tea than I can really fully appreciate, not just interesting and nice but refined, with complexity and depth to it.  It makes me further consider the issue of acclimating to a tea type.  As an analogy, I can't appreciate Scotch whiskey at all, but do I need to?  Coffee and beer worked like that, as acquired tastes, maybe not great examples since I don't drink much of either just now.  I think this may be a different case than with Scotch, that there's a shorter gap to bridge since I already like tea, in general.

But I will keep going with the other pu'er samples, and pu'er in general, and see what I make of it.  I'm reminded of something one of the more out-there tea friends I've met said, that one of the worst things that could happen to you is finding a pu'er that you like.  Maybe I'm playing with fire, and I'll turn into an even worse tea-junkie than I already am.