I feel a little like writing one of those tea reviews that just basically says "wow."  That would definitely be easier than describing this tea.  I tried the tea twice to adjust brewing--the running theme for me getting back into pu'er--and more tries would make it more familiar.  One obvious thing is nice initially:  it doesn't have the mineral / green tea / smoke / taking an aspirin bitterness young sheng pu'er tends to have.

Since the Golding Shop website doesn't include full details, and it was only described as the name, Jing Mai Xiao Shu pu'er, I asked them to describe what it is:


The Jing Mai Qiao Shu is from the year 2013, so it is not really aged, just lightly so... The Jing Mai Xiao Shu is of the small/young tea tree variant. It is approximately +- 80 years old. Hence Xiao Shu = Small tree if translated literally. Gu Shu/Da Shu means old tea tree, and for these, we use only trees that are above 100 years old.


Given all the debate and accusations over pu'er source descriptions and tea tree ages in the last few months that goes straight into controversial territory.  I'll get back to all that in another post, eventually, leaving it at that for now.  I will mention that they are directly involved, on-site in Yunnan, with the leaf sourcing and production of their privately made pu'er, so it's not just a case of someone repeating initial producer claims.  Most agree the impression of the tea itself is more critical than the age of the trees, or even origin location and other back-story, and the tea itself was nice. 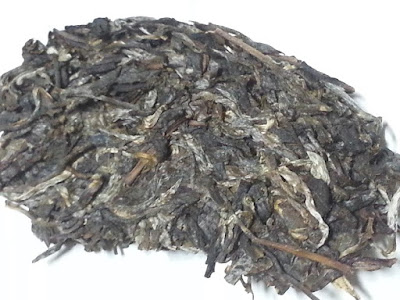 
Even the dry tea has an unusual scent to it, rich, sweet, with a bit of spice, and one other element it's hard to make out, maybe along the line of brandy (sure not really it, but that gives the idea).

It took a few infusions to really get the tea going, to loosen up and extend the expression of flavors, but even immediately there was a nice range of aspects going on.  Floral was probably the dominant aspect range, with just a hint of the spice I picked up in the smell (or thought I did).  Spice can be a nice range for teas to express, as often happens not one clear spice element I found easy to pick out, towards clove, but really stopping at a different aromatic bark spice range.  The rest of the range didn't get any easier to describe, floral, just a touch of date, leather, and wood, and more pronounced minerals, but not the sharp, light, flinty limestone range minerals, more like how a dark red clay might smell.

None of this sounds great, to me at least, but the effect was really nice.  There was an overall balance, a subtlety.  As far as feel and aftertaste go this infusion level seemed a little light to really get the most out of that.  Drinking a tea brewed very lightly can mask negative aspects, for example offset astringency, but to an extent it can also make it easier to separate out minor aspects, even though that seems a bit counter-intuitive.

People more into pu'er seem to pick up preferences that could make perfect sense with a lot more experience, but I'd not have an opinion as to what feel or aftertaste elements are desirable.  At the end that rich mineral taste remained as an aftertaste, in an unusual range, not something I've experienced before, and that did seem nice.  I almost want to say there was a dryness to it but that's not the right word; it just had an unusual feel in the center of the back of my tongue and the roof of my mouth.  That didn't change things much for me, for better or worse, but it was interesting. 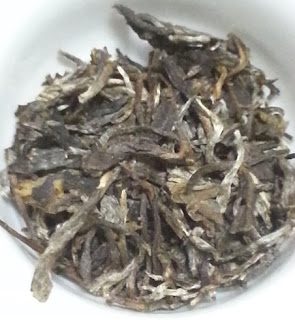 I think drinking that Hong Tai Chang Thai hei cha did help me appreciate this.  I wouldn't say the two were similar but there was some overlap in the range of experience, the unusual tastes, relating to adjusting to more mineral aspects in teas.  This one is a good bit cleaner, more subtle and sophisticated, and somehow more interesting in general.  That tasting comparison wasn't direct, for what that's worth; I tried that tea over the two days prior.


Some of the dark wood / leather / unusual mineral range was similar, just very faint in this tea, but the trace of spice not so much, and for being in such a strange range (novel to me) the flavor aspects were pleasant.  The tea is quite subtle, even though listing a lot of flavor elements and other aspects might seem to contradict that.


Across infusions the tea didn't seem to change much, but then I suspect someone more familiar with a taste range would pick up more transition, or if someone was more tuned in to other aspects maybe related to those shifting too.  There wasn't much in the way of astringency or a bitterness to subside but the tea did become a bit smoother all the same.  I suspect these brewing parameters were getting close to a "right" range, much as there might be such a thing, but I'll experiment a little, try it just a little stronger and see what happens.


Even the initial wash gives off sweetness and complexity, a rich floral taste with some underlying element that is really interesting, towards red wine or spice.  I just read an interesting article on pu'er fermentation that gave one reason for discarding a rinse rather than drinking it, more for shou or aged sheng.  It relates to what fermentation actually is, what the micro-biological components are doing and what trace compounds are being created, but I'll hold off on mentioning details just yet.

Related to talking to the vendor about the tea he wasn't getting that spice element, so maybe it's just in my imagination, or I'm interpreting something else in an unusual way.

The tea is still subtle when brewed slightly stronger, still with great complexity and interesting character.  Unusual aspects are layered together, just nothing too forward.  There is plenty of floral tone to it, and a lot of mineral going on, but somehow that more minor aspect that gives it the extra layer of complexity is more interesting, since it seems to pull the rest together into a really unique experience.

The tea isn't really bitter but there is a bit of effect across a broad range of tastes that supports an impression of fullness and complexity, and a little bitterness is part of it.  It's so light that it's really more about filling in range than an element that's either positive or negative.  It would be easy to overlook the role the sweetness plays, since all the rest works better with that as another context element.

As infusions pass the tea softens and becomes more full but I'm not experiencing a lot of flavor aspects transition, maybe just shifts in the balance of the different aspects.  The feel shifts from the sides of the mouth to the rear of the back of the tongue.  But then I'm still not clear on how that sort of thing is interesting or relevant.

It's a cool tea.  The general subtlety makes it nice to drink water along with it--not warm or cold, neutral in temperature--to keep experiencing it more fully, with a fresher palate.  I might contrast it with a Dian Hong I reviewed recently, a great Chinese black tea.  It had lots going on, and great character, but it was all right there to be tasted, with one interesting feel element as background.  Then again maybe someone more familiar with this tea range might say the same thing; a reasonable number of aspects are right in front of you, no mystery to it.

I don't need to consider if I like the tea, as I've been going through with others lately, since I do, but I do wonder if I love it.  I wonder how my experience of it would change over time, or how the tea itself would, with age.  Pu'er has been that one tea type I didn't really get around to, the unexplored range.  Teas like this one highlight that there is still a lot of novelty to experience, beyond interesting aspects into different overall effects.
Posted by John B at 11:14 PM