Dan Cong!  Definitely one of those types you'd love to find a good example of, and this Mi Lan Xiang / Peach Orchard version was nice (listed here).  It's hard for me to compare it to the range of a lot of other Dan Cong versions, since I'm newer to this type than many others, but it compares well enough with the few I've tried (a review of a commercial version with type background research is here, and a later review of another here).  Anyway, the aspects of the tea tell the story, so on to review, after one other related mention.

China Life has posting great introductory tea videos on You Tube, basics about brewing technique and such, and also on to more advanced content.  I just watched one on sourcing Dan Cong, and this video was a novel take on blind tasting four Dan Congs together, and this one a good introduction to the general Dan Cong tea type (probably a good place to start).  Don (the company owner) is visiting where those teas are made in China, walking around the plants growing and through a village where they process the teas, so the video background alone is worth a look. 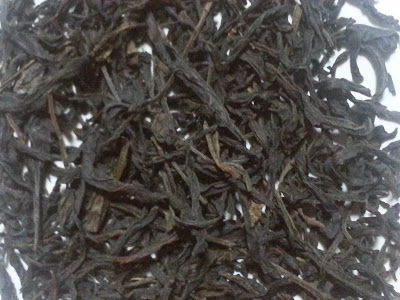 The dry tea scent is sweet and rich. The tea appears very tightly twisted, and dark, perhaps a bit oxidized or roasted as Dan Cong goes, but tasting tells more about that.

Peach does come across first, as tastes go, fresh and intense.  The taste range is full and complex, with good sweetness, and a good bit of tartness as well.  As with many types the overall effect is more about how it all balances than which positive attributes come across.

The balance is nice, although the tartness is at the limit of what would balance well, perhaps too much for someone that doesn't care for that aspect.  It seems related to the mild astringency some Dan Congs have, just a different expression of something related, more a flavor element.  For a second infusion I dropped the temperature a bit more and went with a quite short infusion, to shift the aspects balance, and the tartness did fall into a more pleasant range in a light infusion version. 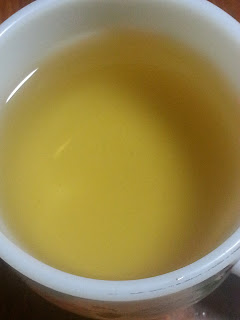 The peach aspect, and some general floral sweetness beyond that, is more than intense enough to stand out even brewed quite lightly. The honey orchid effect actually picked up a lot in a lighter brew strength, or at least it seemed more likely due to that change to lighter, than due to a natural flavors transition, since the tea was just getting started.


Normally brewing around aspects in a tea is a bad sign but Dan Cong are supposed to be more temperamental, and tend to work better as very light infusions, and some degree of tartness and a unique expression of astringency are normal.  Astringency often resembles the feel in an unripe fruit, nothing like the heavy earthy-flavor accompanied roughness / astringency in Assamica based black teas (assuming the normal connection I'm making between flavors and feel actually makes sense).  The tartness in this tea comes across as a taste element but it is tied to feel as well, the tea just isn't particularly astringent, it doesn't have much of such a bite to it.  One relatively well-informed tea friend has mentioned that Dan Cong wouldn't be as appealing to him without that bit of astringency / dryness, that it helps balance the sweetness and flavor intensity.  Maybe; I guess it depends on the tea.


Both the taste and the partly brewed leaf appearance show the tea to be mid - level oxidized, perhaps a trace more roast than average as Dan Cong goes (at a guess; I'm working from relatively limited exposure yet, not a large sample size of versions).  It's nowhere near the normal range for Wuyi Yancha, many of which are then roasted until char taste comes into play, so still a light version compared to the way those two aspects might play out in those oolongs (oxidation and roast level).  Editing note:  I hadn't checked the vendor page but it is listed as "deep fired."  Compared to Dan Cong standards, maybe, but related to Wuyi Yancha and highly roasted TKY I've tried still only medium.


As infusions go by the tea softens more, and honey sweetness picks up, with peach transitioning into floral aspects.  Brewed right the effect and balance is nice, and tastes are clean, with a good degree of aftertaste.  The tartness is a function of brewed strength, it seems, so balancing that isn't so difficult, through quite short infusion times, which works since the other flavor range and sweetness is well expressed in a lighter strength.


A tasting aside, about my young co - taster's input (the one who flagged banana in that China Life Oriental Beauty--not so sure about that call).  I gave her a taste, and she said it tasted like tea.  I had that coming.  If by that one means Lipton tea bags it really doesn't.  I asked what other tastes, and she said like flowers.  I was so proud of her!   I had just written that, that the peach had transitioned to floral.  She is on the path.


She also just tried some of that China Life Oriental Beauty I had put aside, cold brewing the tea overnight to get the last out of it, through which it had picked up a bubble gum sweetness.  That tea had essentially been finished, through a full round of infusions, but it had the one more in it, interesting but largely spent.  Anyway, she said she liked it better, so maybe her flavor identification is picking up but she needs to continue a bit further along a preference curve.

It was interesting comparing this experience to the Gongfu tea brewing instructions on the box:


...increase the amount of leaf to 5-8 grams per 200 ml of water  and reduce your brewing to 15 seconds... you can re infuse the tea  many times up to 10 times for oolong tea), just add about 5 seconds extra for each infusion.


Of course with any brewing approach that would need to be adjusted for the individual tea and for preference.  Dan Congs can be touchy, and this tea provides plenty of flavor but worked better with faster, lighter infusions, even shorter than that.  I mention it here as interesting background, related to what I was already saying, not as a critique of labeled instructions, because that is a reasonable standard starting point.  Different teas fade faster than others, but it's easy to shift timing to account for that since you've always just tried that last infusion to base it on.


I tried the tea later brewed more Western-style.  I really used a hybrid style, to be more specific, with a proportion and timing shifted a bit from conventional Western brewing towards those in Gongfu brewing, perhaps not something I should be recommending since that could get tricky balancing those factors.  It worked quite well; I was surprised.  In past experience Dan Cong really does need the short Gongfu style infusions to work out best, often limiting the unusual astringency I'd spoken of (or tartness in the version), but I was able to get a similar balance using a completely different approach and set of parameters, and in a slightly different flavor-aspect range.  The sweetness was about the same, with tartness diminished, and the taste started as peach--the same--and included a bit more of an almond aspect, then moving to more floral.  I might have liked it even better made that way.


All in all a nice tea, complex and refined.  I get drawn into questioning just how nice, how teas compare to the best of the type, or where they fall across a general range, or how value-related issues work out, but all of that is not part of a normal review scope, and more challenging for me to assess at this point.  I liked it; it was how I just described it, interesting and pleasant.
Posted by John B at 4:11 AM