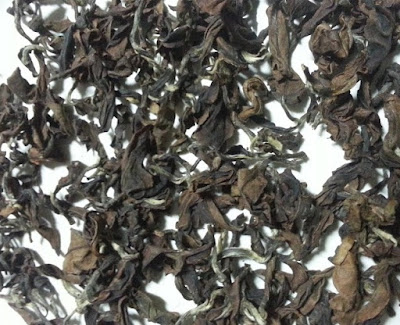 The tea tastes like an Oriental Beauty (what I'm going to call Bai Hao here; the same thing).  It's a pretty good version of one from May Zest tea, but of course good is always relative.  Per my understanding the typical type profile aspects include muscatel, citrus, other fruit, and spice, with good sweetness and aromatic characteristics, and this one is like that, heavy on the spice.  That spice in this version is cinnamon, not really atypical, just not normally so pronounced, and quite pleasant to experience since I like cinnamon in a tea.  There is some citrus and a good bit of muscatel, with nice clean flavors, and good sweetness, with fruit in the range of peach as a secondary element.

I feel like that's just about it for the review; it tastes like a nice OB should, just a spice intensive version, while some go heavier on fruit aspects (peach and such, maybe even berry for some).  It's right in the middle for level of oxidation, the normal amount for the type, on the high side as other oolongs often go, even those described as mid-level oxidized.  Or maybe level of roast might complicate all that a little, but I must admit I'm not completely clear on how processing this varies from other conventional oolong types.  Some OB / Bai Hao versions could have more tips that this one, but it does include some, and the look and dry leaf smell are what one would expect.

This tea is one of several grades of OB that May Zest sells, not the highest, per my understanding, since they were out of some others at time of order.  Since I understand this is a summer tea maybe that will change in a month or two, and for a tea like this type what they find and sell might well change a good bit year to year.  Per the general type it depends on a specific type of insect eating just the right amount of the tea leaves.  I've recently read a good World of Tea general type reference about how that works, or a more conventional Tea Masters blog review format (Taiwan based blog) says more, and I wrote a blog post summary of the same issues last year.  China Life made a video summary about the type, for people that prefer to watch video (but still read this blog, I guess, since I'm mentioning it here).

How would the other grades differ?  I'd expect they could have more fruit, a brighter effect, shifting the balance from spice to citrus and more muscatel, maybe even into berry and such.  Quality level also depends on sweetness, for this tea, and a full feel, and clean flavors, how well a tea brews consistently across a number of infusions.  This version performs well related to those, per my understanding, compared to other versions, so a main factor is if cinnamon as a dominant taste element is preferred or not.

The China Life version I recently reviewed was different for being more oxidized, another variation someone may or may not prefer.  Per both the Tea Masters blog post and the May Zest description OB versions are typically 70% oxidized and up, so not exactly mid-level compared to other types of oolongs, on the high side, but on the upper end of that range a tea would start to seem like a black tea.

Lately I've been considering the idea of saying exactly how good teas are, or rather working around that, feeling a gap when I don't give a full opinion.  To communicate my full impression of an Oriental Beauty, when I've tried others relatively recently, it would make sense to compare the teas directly, but that wouldn't seem so necessary to a vendor if their tea compared less favorably.  I'd be communicating my opinion, though, and someone else's might well vary.  In this case someone could love cinnamon in a tea and not prefer fruit, or vice versa, and that would tip the balance of their impression.

This concern also leads to the role of a blogger.  Is the writing for marketing, speaking for vendors, in order to get some free product out of it, or is it objective review, to inform the readers?  Related to that part about samples, I bought this tea, but they sent some extra samples, and they've passed on free samples in the past, so it's a factor that still applies in this case.  It may seem like bloggers that only discuss aspects get the balance right; a tea tastes or feels a certain way--that's it.  But two teas could share virtually identical aspects as they would be defined, and still be different quality level teas.  For example, I just tried a Dian Hong that tasted like malt, chocolate, hay, and yams, and a better or worse version might also taste like that list of aspects, but not be as good, or could be better.  It only goes so far to specify how "feel" relates, or how "clean" flavors are, or the issue of a tea brewing more consistent infusions.  Bloggers / tea reviewers get their own sense of this, how good a tea is, but again it mixes with issues of subjective preference.  I'd think most would get some sense of how those two inputs play out.


A lot of this ties back to my recent post about unwritten rules of blogging about tea, on reviewing conventions.  Citing personal preference related to teas breaks with convention, although it's also normal for tea bloggers to imply that they absolutely love every tea.  I claimed that it violates convention to review a tea from a wholesale source, and May Zest is that, they just don't sell teas per 50 gram sizes through a check-out website.  Why wouldn't someone review tea from different types of sources?  It would be strange to review a tea from both an original source and the vendor that resells it (that tend to give bloggers free samples), especially since that resale vendor would rather not publicize where the teas come from.  It also violates a convention--breaks one of those rules--to talk about tea pricing, but obviously along with a requirement to buy higher volumes pricing is lower from wholesale-theme vendors too.

The trend now is for vendors to buy direct, right, if not directly from a tea farmer then from someone who claims to have done so.  In a sense it doesn't matter that it's almost impossible to verify that, that a reseller in the middle could still pass on where the tea came from, who grew it, so marketing could just refer to the more upstream step.  In that example it would seem to not matter which company someone bought it from, but each step would add resale cost.  One other issue with final-level vendors buying tea from wholesale sellers (that might buy from aggregators, another layer) beyond adding costs is that it's possible that more mediocre, mass-produced teas would take such paths.  The "best of the best teas," or at least those not good enough to be spoken for before they're even made, would instead be carefully sourced by tea-curator theme specialty vendors.  Or at least that's how the marketing stories go.

The reason I go into all this is to reinforce that regardless of the story attached in the end it's about how nice the tea is.  Of course nothing is ever so simple; there are also concerns related to a tea being organic, for some, or if a well-paid and happy worker picked and processed it, or if someone being oppressed by a life of poverty did instead.  But I'll move past all that.  Someone could curate crappy tea directly from a farmer, or tell a very nice story that's not true, or a long, typical, multi-step wholesale process could procure and sell a great tea, even at great value.

This tea I reviewed is pretty good, and that's a lot of the point, beyond the "naming names" related to aspects.  One other thing I've been saying lately; even though I've tried a number of Oriental Beauty teas I'm not the right person to put it on a well-informed objective quality scale, even if I weren't conflicted in doing so (and I'm not all that conflicted; I'll keep on with the tea hobby regardless of how samples play out, so I'll keep saying what I think).  So to be even more direct:  I think I might like that Thai version I kept writing about a little better (that was some nice tea), and the higher oxidation level in that China Life version might not work as well for me.  But someone else might have different preferences and switch the order, since all three were decent versions of Oriental Beauty.
Posted by John B at 2:46 AM