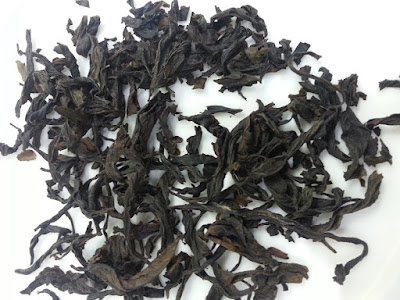 During the last visit to the Jip Eu tea shop in Chinatown, where I tried some interesting 40 year old aged Tie Kuan Yin, I also picked up an unusual version of Wuyi Yancha (Fujian oolong), a Shi Li Xiang.  I understand that to translate as ten league fragrance tea, or something such; that unit of length just isn't going to translate properly, and "ten kilometer aroma" does put a more modern spin on it.

This is an unusual type of tea.  I think I've had a Thai version before, or at least a tea sold as this, but it wasn't good.  I'll have to look into what it even is.  I wouldn't have bought the tea except I tried it first and liked it.  It's immediately evident that it's decent tea, nothing like a strange tasting grocery store version, but it's not familiar.

It's fragrant, and aromatic, as the name implies.  A primary taste element is similar to almond, but it's complex enough that listing out tastes isn't so simple.  The effect is that the tastes are clean, and the tea is reasonably balanced, and well made, but there's a lot going on, so it's not exactly subtle.  It's a medium roasted Wuyi Yancha, so the roast effect is something else, not coming across as "char," but starting in that direction.

Mineral undertones are the base; normal for the general category (Wuyi Yancha).  The vendor said that the tea would change a lot over a year, which is the way to settle out that char effect (if there had been one), by a relatively short one to two year aging process.  He said that the fragrance would also diminish, so a year of aging would be a trade-off in characteristics.  They had both versions there, this year's and last year's, so if I'd have more time I would have tried both, but I was in a bit of a rush that day.  I tried this one so that's what I bought.  They're nice to visit with in that shop, by the way, with a deep history related to selling and making tea, so better to plan out an extra hour or two of trying teas and talking about tea if you do stop by there.


In the end it's nice.  It's not a tea one would be likely to drink all the time, but then it's probably not a tea one would find a good version of very often either.  That aromatic component is familiar, from a related aspect in a Bei Dou from this vendor, a "real" Da Hong Pao.  Or so the shop said in selling it; I get it that people tend to be skeptical about claims about some tea types, that one more than most.  This post covers why Da Hong Pao isn't always even intended as a plant type, used as a generic brand name, even though it's the general understanding that it is plant type.


This tea is hard to place related to other Wuyi Yancha types.  For having a lot of earthiness, mineral, fruit and floral apsects, whatever else they tend to have, they don't usually come across as having lots going on.  They typically seem to retain a subtlety, in a limited sense, based on showing a few interesting aspects, with some degree of layering of characteristics, at least the better versions.

This could almost be a flavored tea for the range of flavors it exhibits, and that aromatic quality, but I'm certain it isn't one.  The effect is too light and clean, and integrated.  I think using light brewing, experimenting with the normal range of gongfu brewing approaches, one could really draw out some variation from the tea.  That's actually how I tried it initially, prepared gongfu style, brewed a bit lightly, standard enough, but tweaking that might prove interesting.


I looked up what this really is, since that name seemed to be a branding name, not a description related to a tea plant type, or something that clearly ties to a regional tea.  It was sold as an ordinary Wuyi Yancha type, so that does include the region (Wuyishan area, Fujian), and that it's a well-roasted oolong, but it wasn't sold in a labeled package, just packed separately from bulk tea.


Before getting into more details, lets do a nice long tangent on tea plant types, starting with this decent Hojo vendor tea reference on tea plant naming.  Such references tend to vary a little in how they use the terms (surely with some correct use well defined), but for the most part this matches what I currently understand.  To sum that up, below the genus and species names for tea (Camellia Sinensis) variety (often written as var.) identifies the main, naturally evolving subtypes (Sinensis and Assamica, and some others), with additional cultivar type as the designation of intentionally bred, specific plant types with different characteristics (eg. Tie Kuan Yin).


The World of Tea site weighs in on all this, backing up the other reference, and clarifying the obvious next question that arises, what if a natural variation occurs that people continue to propagate:


Some confusion arises with the fact that a cultivar is simply a cultivated variety, meaning that someone has recognized variations in a plant and has cultivated it to maintain these variations. The plant is still a variety, but because we’re cultivating it, we call it a cultivar. We know that in the tea world, cultivars are created from one of the main varieties or hybrids between the main varieties of Camellia sinensis used for tea production: sinensis, assamica, and to a lesser extent, parvifolia. This is why we sometimes see a variety and a cultivar listed for tea plants — when a plant exhibits variation within a variety, and is cultivated to maintain this variation, we end up with both a variety and a cultivar.

Simply put, varieties are found naturally in the world, once we propagate them for their variance, they become cultivars.


So there it is; if we determine this plant type is a derivation of another type, be it a hybrid (mix from different genetic inputs, from two varieties) or a change from an existing type then it's new cultivar.  It's unlikely that it's not just a variation of the Sinensis variety, although that is a possibility.

What would it take for this type to be identified as a new variety?  Of course not necessarily new in the sense of just starting to exist, since this tea is coming from old plants (more on that later), but in the sense of recognition?  The first Hojo article sort of addresses that, but only in mentioning a limitation, that the new hybrid plants used in Darjeeling, crosses of Assamica and Sinensis varieties, do not have a clear scientific name designation; there is no identified variety.  Per a recent post on Darjeeling these go by clonal tea type names, like AV2, discussed in that post.  These would still be cultivars, of course, cultivated distinct types of plants, but per my understanding with no variety designation assigned (which of course could be mistaken; I'm still sorting all this out).

It makes you want to check out a table-style reference of tea-plant types, doesn't it?  Or maybe that's just me.  I'll include one I've mentioned before here, back to Taiwan teas as a reference, where they keep such things well defined.  The earlier section of this table is on the numbered cultivar series, familiar to most (eg. #12 is Jin Xuan), and if it's not you should check this reference out, although it's partly unreadable due to lots of talk about genetic marker testing, but fascinating nonetheless: 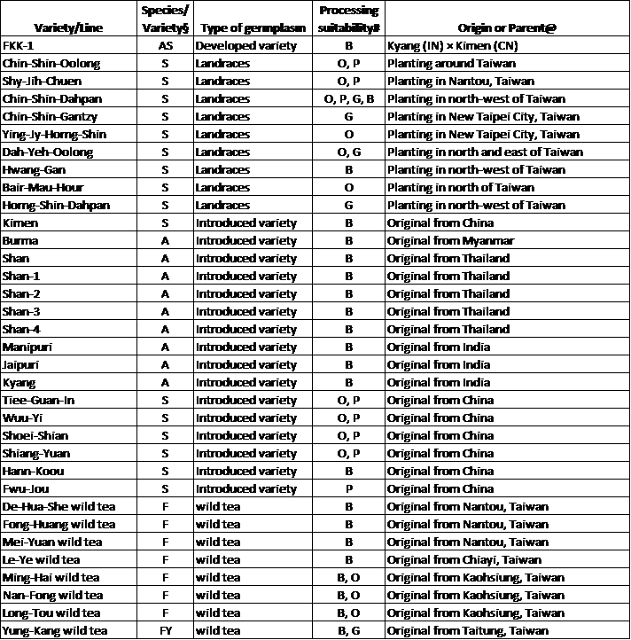 The A and S variety are familiar, but the F is interesting, right?  This from the footnotes:


Back to Shi Li Xiang; what is it?


The Shi Li Xiang name is relatively Google-proof; odd.  Except Chinese restaurants tend to use the name, which seems irrelevant.  A relatively complete database of teas reference lists a Kun Ming Shi Li Xiang tea that's seems to clearly not be it (the page is interesting though; described as an International Tea Database).  That listing is for a compressed tea that might be a tisane, not what this is, or at least seems to be.  An academic paper mentions this as a tea tree type here, titled "Research on Protection and Utilization of Old 'Shilixiang' Tea Trees in Kunming," but the paper isn't publicly available.  Since that's already interesting I'll cite the description of that work:


Research was done on the cultivation history, present status and protection value of old 'Shilixiang' tea trees in Kunming in order to deepen the recognition of the precious tea species, and to carry out scientific protection and utilization of the resources.


That brings up an interesting part of that other database citation:


This tea was unusually aromatic, so much so I just asked the vendor by message how they made it so.  But it seems natural to me, a taste from a tea, just not exactly like any other I've tried before, except overlapping a little with that one Bei Dou.


A mystery solved, sort of


I asked around and a lead from a Tea Chat discussion seemed to crack the mystery.  Per that input the tea is probably the same as Qian Li Xiang, which is 1000 mile fragrance (so it travels 100 times further, but it's the same tea?  probably just a name anyway, and I might mention that I didn't actually verify those translations).  This tea name (type) does come up in Google search, just not as very many results, and standard tea information sites don't seem to come up, in general (not as if I spent a day cross-checking possible listings, Google just wasn't mentioning them).  All the same, any mention takes it as a given that it's just another cultivar type, and probably var. Sinensis, same as other Wuyi Yancha, just a bit rare.  Descriptions aren't a perfect match but a general impression that it's a very aromatic tea are enough; it's likely the same.

One discussion comment suggested the name may relate to a processing style, not a plant type, which would makes sense, naming conventions do tend to shift about.  I'm reminded of Cindy (a tea-maker friend) mentioning the tea plant name of a Dan Cong she was referring to by the aroma name instead, a more common designation for those:  "its name is juduozai ,but its aroma is xin ren (nut) [almond, typically], so we also call it xin ren xiang [almond aroma]."  She also said that "danzhu" means picking from one tree, and processing in one machine, for harvest and production lots all taken from a single tea tree (which is completely off the subject, but I just saw that looking up that Dan Cong cultivar name discussion).

Here's a vendor description under Qian Li Xiang that seems typical, which says almost nothing about the tea except that it's aromatic (although at first read it seems to say a lot; funny how that goes).  Most likely there is another cultivar name out there for the tea, so something like the World of Tea cultivar database would be no help based on listing plant types only by the actual plant name, and in fact it isn't any help.  The other listing of tea plant types I'd already cited also didn't mention it.

So it was an interesting find, not quite as interesting if it had been some really novel wild tea-related plant, but it drinks the same either way, or probably better for actually being tea.
Posted by John B at 2:49 AM