A background / basics post, on using combined or multiple-sample tastings as a tool for evaluating teas, and also just for experiencing them differently.

This relates to intention:  if a resale vendor is visiting a plantation to choose a black tea (or any type) from among a dozen or more versions then of course they are going to taste them together.  For drinking tea with friends, Gongfu style or prepared Western brewed, it would probably make more sense to drink one after another.  But drinking two or more teas together can help you identify much more subtle character differences in relation to each other, eg. one might feel thicker, taste slightly more complex (even though similar in range), or a difference in length of aftertaste might stand out.  It's a good way to help determine how aspects combine to build up the overall effect of a tea. 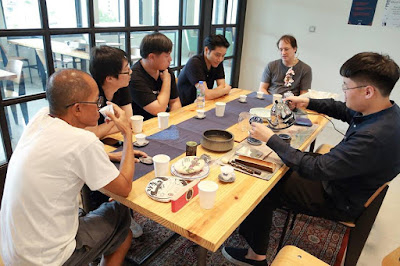 Until it's familiar to drink two or more teas together the experience can be a bit much, a lot to take in.  That's counter-intuitive, because if you can taste and notice aspects beyond flavor for one tea it should be simple to extend that to two or three.  It's also odd that background noise volume significantly affects how much detail you notice in tasting a tea, but experientially that becomes very clear, that it makes a lot of difference.  In typical combined tasting practice it's natural to narrow down evaluation form to consider less detail, for example to focus more on flavor but not consider mouthfeel and aftertaste aspects as much.  With a bit more crowding of input stimulus only the primary flavors would stand out, the main tastes or aromas. 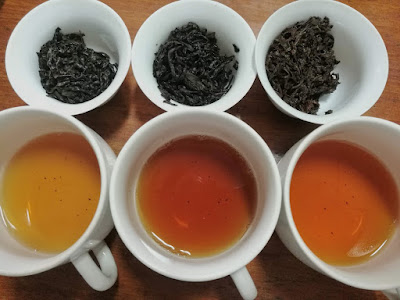 To some extent flavor and other effect builds across time when drinking some tea types, and combining drinking two versions can limit that.  Drinking cool but not cold water can "clear" your palate in between tasting samples or rounds, but it can't completely adjust for experiencing the tea in a different form, for the lack of continuity.

For some giving up noticing the "cha qi" or feel effect of a single tea type is a crucial limitation.  Not everyone notices this to the same degree, or values it in the same way, but combined tasting does rule out being able to distinguish this from either as a single source.   At some point the amount of tea drank also becomes a limitation, taking in too much caffeine.  It is possible to spit the tea back out while tasting it, effectively countering this issue, but for many that wouldn't be a preferred option.  For a professional tea taster it would probably be necessary, just a given.

A much finer level of level of detail can be detected, especially in relation to differences between versions.  With enough practice and appropriate taste-memory gauging a broad range of aspect types--beyond flavor--against a central baseline would be possible, but it requires relatively little practice to drink two teas of the same type together and notice the common ground and differences.  In the longer run combined tasting can help someone self-train to be more familiar with these types of ranges, or establish what is typical or best in a specific type.

It works better the more similar two or more tea examples are.  Once the approach becomes more familiar a contrast-theme tasting could also work, experiencing substantial differences, but until then sticking to at least similar versions would work better.  It's just too much ground to cover if teas differ a lot, and parallel brewing process concerns complicate things more if versions aren't similar. 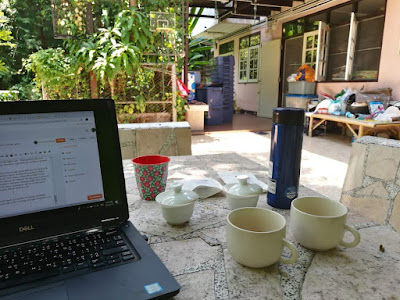 One special concern is that even if teas are brewed in exactly the same way (using identical proportion, devices, water source and temperature, and timing) not every tea will be at it's best using any one set of parameters.  A typical Western-style standardized approach offsets that by using parameters that aren't necessarily ideal for any, over-brewing teas slightly in relation to that metric.  This allows for greater detection of flaws and to adjust evaluation process (judgment) related to that preparation style becoming familiar.   ISO 3103, a brewing standard, covers one such approach and the main theme.  I'm going to part ways with discussing that general approach in favor of discussing how to brew tea in the most preference-optimum form using a Gong Fu approach instead.  This is only because that's how I approach tea tasting, not intended as a claim that it's better. 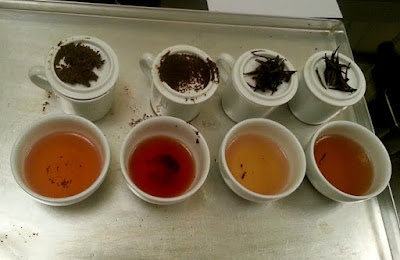 I use identical gaiwans to taste multiple teas.  Most often I compare only two versions, but have used this approach for up to four.  It gets to be too much tea over a short number of rounds for any more than two versions, and even for two using a small gaiwan works better, in the general range of 90 ml.  Using tiny gaiwans would also work, 60 ml or so versions.  Proportion should be whatever seems most familiar; what would seem to work best related to single type tasting.  I have made an adjustment to brew a lower proportion in order to make it through a complete sequence of rounds in tastings, but most often that related to being short on time.  Adding any unfamiliarity to the process adds difficultly.

It can come up that one tea brews faster for whatever reason, or is more intense, so that the same timing doesn't work well as an optimum for both.  In such a case I tend to brew both in the middle of what would be ideal for either.  It is possible to brew one version twice as long as the other, and throw off a parallel brewing structure, but observations comparing transition cycles wouldn't be as meaningful.  Any of these factors end up tying back to the intent.  If brewing is intended to objectively and completely compare two versions for review that might be a different goal, requiring different process, related to the approach serving an informal training function.

It works well for me to adjust infusion strength, going with what I see as a typical optimum for most rounds, and brewing one or more faster or slower instead to experience the teas in a slightly different form.  It's possible to guess what that would change from the "more optimum" infusions / rounds, but results aren't always what you would expect.  Brewing a tea slightly stronger tends to make flaws or imbalances show up better, and brewing it very lightly can make it easier to distinguish individual flavors, even though that's a bit counter-intuitive.

What to expect experientially:

It takes time.  You can't rush trying to fully experience one tea version over a number of rounds, and doubling or tripling that scope takes even longer.  Taking notes may or may not be of interest; again it depends on the intention.  Even only for personal reference it's very difficult to retain a detailed level of memory of individual aspects and transition cycle for more than one tea.  A month or two later most of that finer detail probably would have faded from memory.  Retaining that later could come in handy related to re-tasting a tea, to see how your impression changes, or to compare it to another version later on.

In cases when a tea might transition (change with age, or vary in relation to any other factors, for example settling after being shipped) retaining a detailed reference might be useful.  Tasting the same tea multiple times can sharpen your own evaluation skills; it often happens that flavors or aspects can be interpreted differently after more exposure, with a more complete impression available after trying a tea 3 or 4 times.

For a brand-new tea type it's natural to just notice a range of how versions can vary, beyond preferring a set of individual aspects, or picking up version limitations.  For trying two nearly identical tea versions--which typically only occurs by design, although if you comparison taste enough eventually chance would bring this up--it's interesting how even finer levels of differences stand out.  Very slight variance in sweetness level, bitterness, underlying mineral tone, mouthfeel (astringency related), etc., can be noticed, at a level that would be difficult to assign if tasting those teas over different days instead.  Very slight flaws or minor positive aspects also stand out more (eg. a less "clean" overall effect, or slightly more flavor intensity of complexity). 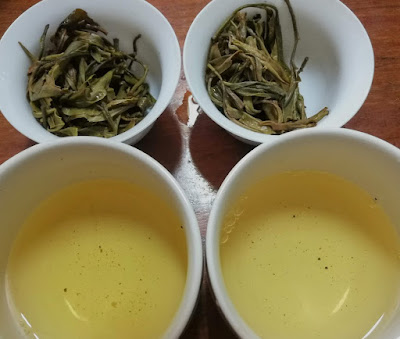 It's odd how much pre-conceptions can shift an impression.  If you think one tea version should be better, or expect a certain range of aspects (eg. based on reading a description prior) these inputs could easily change results.  It's even possible to get "stuck on" identifying the same aspects over and over, based on expecting them (eg. noticing cherry or cocoa in most black teas).  That doesn't necessarily mean it would be "better" to do a more blind tasting; again it depends on goals and preference.  In any case individual preference will shift interpretation of any experienced characteristics, so subjectivity is an integral part of the process.

As you experience finer levels of details minor variables would come into play more.  For example, mineral content in water changes outcome, and the same water wouldn't necessarily be optimum for different types.  Extending that a little two similar type but somewhat different samples might compare differently based on the water used (related mostly to mineral content, and also ph, and perhaps other factors).  Tasting slowly or faster would change how much time wet leaves would have to cool between rounds, altering final brewing temperature slightly.  Variances in the taster probably also plays more role than one might think.  It's as well to just keep things relatively uniform and not sweat all the details or outcome too much.


It wouldn't be for everyone, such an approach.  It's not a great match for casual tea drinking, adherence to ceremonial form, or when aiming for some sort of mindfulness experience.  It can be positive for training or detailed review purposes.