I'm sick again!  The short version:  I drank a lot of tisanes when I was sick recently, and trying out variations of masala chai worked a lot better this time than any single tisane or mix of those had then.  A chen pi (shu pu'er stuffed tangerine / orange) didn't seem to have much effect.

I probably pushed it related to getting back out running in moderately bad pollution within a week of recovering from that last sinus infection.  The levels had spiked to quite severe a day before the last run and partial clearing of that smog probably wasn't enough. 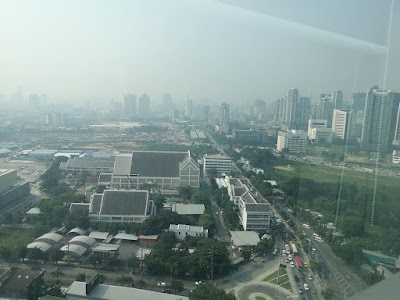 A doctor said that I'm fine, that I just need to drink fluids, rest, and wait it out.  I think this pollution may be too much for us, since my wife and kids have been sick too.  We've been using air purifiers at home, so we get a great break from it at least one third of the day, or more than half if we're around the house a lot past sleeping, but apparently it's not enough.

We have masks to wear.  They're the special versions that filter a lot better than the green or white ones you can pick up in a hospital, surgical masks, but it just doesn't work to live in those.  It seems like your body can handle a moderate degree of pollution well enough, until it can't, and then you become much more sensitive to it.

The tisanes I wrote about drinking in an earlier post didn't seem to help in any medicinal sense, but it had been nice drinking a lot of hot beverages, and going easy on caffeine.  I speculated that masala chai blends, maybe even made with tisanes instead, might work even better, but I felt a bit wiped out to spend 20 minutes mixing inputs and simmering tea during that first round of illness.  So I tried it this time.

It seemed to actually help.  On the third day or so--hard to pin down the exact day you get sick, since you can just feel a bit off at first--I prepared masala chai, Indian spiced black tea, made with half black tea and half willow herb (aka fireweed / Ivan Chay).  For spicing I used clove, cardamom, cinnamon, and nutmeg, not exactly typical but it sounded good.  Drinking two large mugs of that, prepared with sugar and milk, brought on a heavy sweat, and I seemed to feel better related to illness symptoms within an hour.  I drank a second round with lunch hours later, adding ginger and fennel seed to that blend, and again sweated quite a bit.  Within those hours the output from blowing my nose ran much clearer. 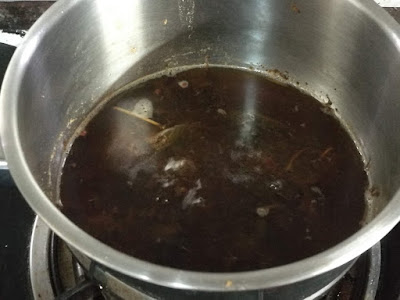 Still, could be a coincidence.  I hadn't eaten much at all the day prior so I was wondering if the spicing wouldn't be a bit much for my stomach, but it wasn't.  The next morning I made another batch, and went a little heavy on the dash of salt I usually add, throwing off results a little, but then my sense of taste isn't great anyway.


Being a little tired of masala chai I tried brewing a shu stuffed orange / tangerine with a lunch.  I couldn't read any of the label but it was clearly shu, not a variation made with black or white tea.  One of the vendors in that Shenzhen tea market threw three of those in with what we bought and I'd not tried one yet. 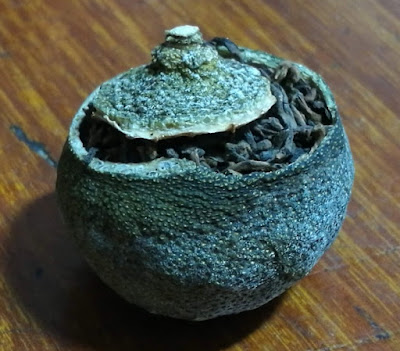 As to approach I brewed it in a tea bottle.  With my sense of taste still on the limited side a flavor-list theme review wouldn't work, and optimizing that never was the point.  It tastes like citrus and shu.  At a guess the flavor would be positive if I wasn't sick, but it's hard to be sure with blocked sinuses.  The second round was brewed for a long time (I wasn't really controlling proportion or timing), ending up tasting nice enough but a little metallic.  Water might potentially taste metallic now, since beyond the illness more or less plugging my nose other symptoms do apply. 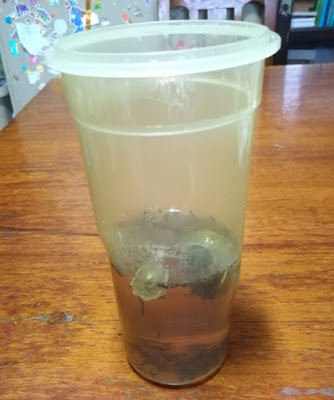 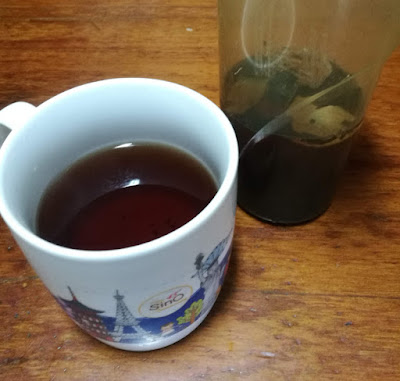 I'm not even sure if the traditional Chinese wisdom / medicine claims say dried (and aged?) orange peel cures sinus infections, or colds, or whatever else.  It's said to have some medicinal properties, I thought, but most likely the list that turns up in discussions and marketing content is broad.  Why wouldn't it be, regardless of the truth of the matter?  Personal effects probably do vary anyway, and there is no simple, singular truth of the matter.


Back to the masala chai instead, there seems to be a lot of potential in using modified spiced tea blends for the same purpose.  Sage and black tea sounds like a potential contrast in character but mixing in a bit of rosemary, or whatever else, and shifting the masala blend part to match might work.  Adding some citrus might be good, since shifting off the original flavor profile would be the point anyway.  It's hard to get that warm, earthy character back though, without black tea, which really ties masala chai together.  I don't completely avoid tea or caffeine when I'm sick, I just try to moderate it, since it doesn't pair well with lying around.

This part is more about talking crazy than a real suggestion, but tied to making roasted pumpkin recently toasting the seeds to a medium brown then grinding those as an input might work.  No one is going to roast pumpkin in the middle of being sick, although I just did since I feel better five days later, and there was a Japanese pumpkin no one was using in the kitchen.


Let me know what you think, if any of this rings a bell, even though no one ever does.  Or if it sounds awful; whichever way that goes.