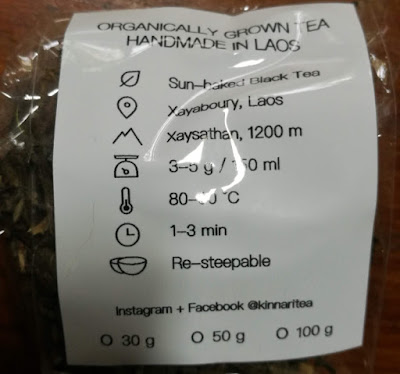 This reviews teas passed on by Anna of Kinnari Teas awhile back.  I did really like the sheng versions I tried then (reviewed here and here).

It's impossible to keep up with trying everything I have on hand and this omission stood out, all the more so for these being two of the better teas I have yet to try.  Not everyone would love them as much as I did, or like the one of the two I liked best versus preferring the other; so it goes with subjective preference.

As far as I know neither is commercially available; so much for these posts mostly serving as thinly veiled marketing.  Since they were experimental versions (per my understanding) more of them may have been produced, or next year they might be developed further.  But Kinnari isn't selling teas via website or retail order in any form, as far as I know.  Maybe I'll edit all that after posting this and talking more to Anna about it.

It's questionable to pass on what I remember of her discussion of these, something along the lines of trying out different processing methods for a tea plant type she was unfamiliar with, that hadn't been made into white or black versions that she had tried.  It's an understatement to say that the experiment was a success.

I did this review without much for electronics support, initially tasting teas and making notes on a piece of paper (funny that system still works).  The photos will be quite limited, and the review format is more sparse.  That last part is probably an improvement; sometimes less is more.  It is kind of a shame the photos are limited; those teas were quite photogenic.


1.  Fruity, distinctive, unusual.   A primary flavor is essentially teaberry, berry and mint.  It's also towards a creamy version of peach, with a hint of spice.

2.  An unusual flavor shift occurred, with it much more subtle this round, similar to the first infusion in aspect range and character, but much less intense.  Aspects include fruit / berry / mint (as described), toasted pastry, and a light vegetal touch, maybe close to teaberry stem, or dried moss.

3.  Still unusually subtle, at least light in flavor range, but at the same time rich, full, and creamy.  Berry and mint is still present, and toasted pastry, but the profile has shifted towards caramel custard, like flan.

4.  A slightly longer infusion increased the intensity, with the pastry effect picking up a little.  It reminds me of Swedish tea ring pastry my mother used to make.  A very light savory aspect joins in, along the line of sun-dried tomato, but it's only a minor supporting aspect, not at all primary.

5.  (Infused towards 30 seconds, versus around 20 prior).  Still quite subtle in flavor, rich across other range.


1.  The flavor overlaps with the white tea range, but it's different, with a touch more menthol effect in the mint and berry (teaberry).  It's slightly closer to how #18 Red Jade / Ruby Taiwanese black teas come across, just a lot more mild in mint / menthol range compared to a typical range for those.

2.  Just as intense, similar to the initial round, maybe just slightly warmer.  This is already one of the best black teas I've ever tried, per my preference.  The overall balance is just amazing.  Sweetness, rich feel, positive mild structure with no significant astringency.

3.  Similar, exactly how one would want a Red Jade / Ruby black tea to balance, but they're just never quite this positive.  Combining mint or menthol with black tea character sounds interesting, and it can be pleasant, but it never integrates and balances as well as this, at least in the versions I've tried.  The level of warmth, flavor complexity, and sweetness is perfect.  I never use that word in this blog, perfect, because it implies a preference basis or type framework, but it's just ideal.

I visited a friend, Sasha Abramovich, a few months back, and tried what was probably the best balanced, most positive version of Red Jade / Ruby black tea I have yet to experience, per my preference.  That tea version wasn't even close to as pleasant as this one.


4.  Intensity tapers off--towards the white in character for that shift.  The teaberry effect drops off a little.  Rich warmth and toasted pastry picks up.

5.  Thinning a little; it could be stretched more, but it's quite pleasant as it is.  It's similar to the earlier infusions but narrowed in aspect range slightly.


These brewed another half dozen very positive infusions; they just wouldn't quit.  Even then they could've probably stretched for a couple more.  Both teas were amazing, very pleasant in completely novel ways, with much different character for each that also overlapped quite a bit.

I could imagine someone not loving the white version for it being subtle, in terms of flavor, but for me it wasn't hard to appreciate how the flavor that was there was great, so well balanced, and well-supported by a pleasant rich feel.  For some silver needle versions feel stands out as much as the flavor, and that can sometimes be a bit neutral, in addition to being light, but this white version's flavor range was great.

The black tea would easily stand in as the best version of Taiwanese black tea I've ever tried, and I've liked a number of those that have crossed my path.  Ruby / red jade versions tend to be too heavy on menthol to me, not well-balanced, and this more than covered that potential flaw.