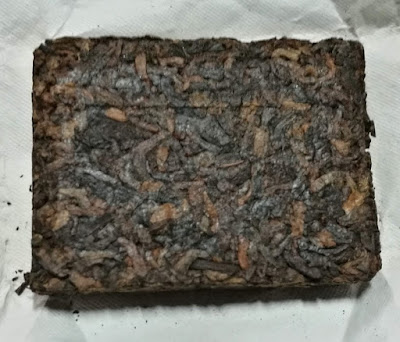 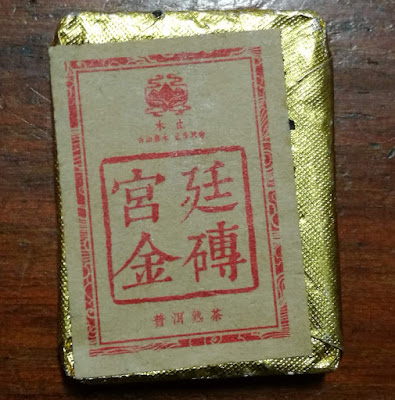 On the last visit to my favorite local Chinatown shop Kittichai, the owner, passed on a few individually wrapped teas, little bars.  Of course I didn't keep track of what they were, and recently tried one that turned out to just be shu pu'er.  It was decent shu, not so unusual that a lot of story comes out of that, but novel related to one flavor aspect.

It also works to describe what normal shu is like, and to talk about value in relation to the tea type, and to pass on notice of that as a great option for trying the type locally (in Bangkok).  It's a little atypical but unpacking all that works better by referencing a couple of similar options from two of the main Western pu'er vendors.


Here's what it was:

Gong Ting shu pu'er (a grade description, relating to being made of a higher proportion of buds)
Producer:  Mu zhi  Co., Ltd.  (Yunnan)

At the end of trying the tea it occurred to me that how good it was really depended a lot on the value issue.  If it was modest cost shu pu'er then it was great, clean in character, with decent intensity, and interesting aspect flavor range.  Priced as an exceptional quality version then limitations would stand out instead:  the feel could've been a little fuller, it faded in late rounds, complexity was good but could've been better.  And it's just shu; that type only varies so much.

At 9 1/2 cents a gram (equivalent to $34 for a full 357 gram cake) it's quite good.  It is possible to buy plenty of shu that's just as good in that full cake price range but for trying random versions costing around that many would fall short, probably more than half.  And it's not a commitment to buy a full cake; in theory someone could only spend the 65 cents on trying just one mini-bar.

To put this in perspective it is much, much better than any of the shu mini-tuos I've ever tried, which are more like a tablet or pellet, and tend to taste a little like ash.  It's not off, muddled, or fishy, or overly subtle; it's above average shu.  I've been spoiled by having a chance to try some really good shu as well, and I'll describe at the end how even better versions might vary. 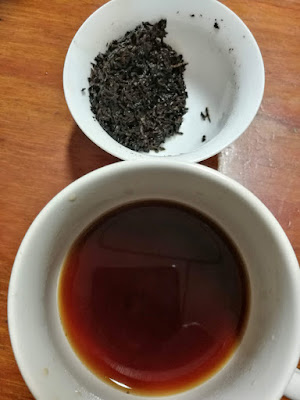 1st infusion:  this is brewed a bit strong, infused for 20 seconds or so versus a more typical 10, relating to rushing the initial wetting process.  It's not bad that way.

It's creamy, with an interesting warm, rich flavor range that reminds me of pumpernickle bread.  That's a darker, sweeter version of rye bread, with the difference explained by Google definition:

Shu pu'er usually doesn't taste this grain-like; it can be earthy and sweet in a similar way, but typically not with this particular flavor.  The rest of the character is just standard for the type:  heavy, rich, sweet, earthy across a really mild range.  A touch of slate might describe the mineral range, but nowhere near as heavy or dry a version of that as is common in Liu Bao (a hei cha type).


Second infusion:  this round is much lighter, not brewed for much longer than it took to pour in the water and drain back out the tea.  That's going to be intense enough, since the liquid soaking in the tea was already brewing it, even when it was relatively "dry."

I think this solves a mystery as to why pre-wetting (rinsing) rolled oolongs makes them much more intense than just giving them an extra 5 seconds of infusion time.  Even the fastest rinse only exposes the tea to hot water for 5 seconds or so (it takes time to pour it in and then back off), but it's not as if the tea is bone dry for however long it takes to get the second infusion started.  It's not still infusing in the typical sense, but to some extent it sort of still is, and you rinse back off the already-brewing wash still in contact with the leaves on the second round.  Moving on.

It hasn't transitioned much, and isn't all that different for being more lightly infused.  I don't think it will transition much across rounds; shu tends to not.  It comes across as roughly the same for being brewed much lighter.  For many tea types that would usually shift experienced aspects quite a bit (eg. increase role astringency plays, ramp up warmer tones or mineral range), but not so much in this case.  Fullness and creaminess drop off a little, but it's still thick, even a little oily.  It has a pleasant aftertaste range; that sweet, dark rye bread aspect lingers on.

This reminds me of buying a good dark Russian bread in either Moscow, St. Petersburg, or Murmansk (I think maybe the last), something unfamiliar but quite pleasant.  It went really well with an unfamiliar cheese version, one of a couple that was slightly smoked.  It's funny how you can really appreciate different versions of bread a lot more when you live in Asia, where they're just not on that page.  There are foreign shops and bakeries around but I don't go out of my way to buy much decent bread; I eat rice, Asian dishes, fruit, and pastry like everyone else.

Third infusion:  proportions of those earlier aspects may be shifting a little but it probably never will transition much.  Mineral tones are picking up a little; that sweet, dark grain-like aspect is leveling off some.  I guess it's that much closer to a Liu Bao character then, but this would have to be similar to a very mellow, aged Liu Bao, since those tend to have a bit of edge to them earlier in their existence.  It's still creamy but that effect may be tapering off a little too.


Fourth infusion:  more of the same; creaminess drops off, and a dark wood tone picks up in place of the distinctive bread-like aspect.


I did brew it for a number of additional rounds but it was just fading from there, narrowing in complexity.  This would've lasted longer but I brewed it on the thick side for the initial rounds, except for trying out one on the light side.  I like shu like that, a bit thick.  It still did produce more than a half dozen rounds but the first four were the best.


It's pretty good.  To get some background on the "Gong Ting" theme and help place the character let's check out a similarly described version from a standard vendor option, Yunnan Sourcing:

This Gong Ting grade ripe tea is a from a wet pile batch done entirely from Meng Song area (Menghai County) tea leaves harvested in 2017 and wet piled in 2018!

Pure Meng Song ripe tea is relatively rare.  It has a unique bitter-sweet character with a fast hui gan and a black licorice sweet after-taste.

For those of you who purchase this tea during the year of 2018 expect that there will be a fairly strong wet pile taste throughout 2018, but one that will fade gradually as tea ages. 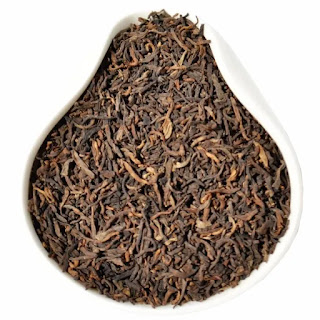 That does sound good.  That version is selling for $4.50 for 50 grams (it's loose tea), which works out to the exact same cost, just under 10 cents a gram.

I didn't necessarily notice a "dark chocolate like bitterness and fruity sweetness" in the version I tried, but warm earthy tones including pumpernickle bread worked well.  Part of the character might've resembled cocoa more; that would've been a reasonable interpretation for what I had pegged as rich sweet grain, underlying mineral, and dark wood tones.

I didn't catch the origin area for this tea, only that it was produced out of Yunnan.  It does seem unusual for Mengsong to be converted to shu, as they mention in this other YS description.  They list a similar looking Jing Mai version, overlapping in description and identical in price, with this part varying:

This Jingmai mountain ripe gong ting is very sweet and thick with an almost fruity creaminess that will become increasingly pronounced with the passing of time.


I didn't catch the production year of that tea either, but it probably had at least a year or two of age on it.  Some versions can be clean flavored and pleasant when quite young, even within the first 6 months, but they usually give up a little complexity later for starting out there.  A bit of an edge and a little extra petroleum range depth, or peat, can serve as a base for transitioning to creaminess and complexity later on.

Much older shu can pick up a depth of character this version didn't seem to have (not that I'm certain of any age range; the starting point and storage conditions dictate where it will end up).  Flavors tend to become more subtle in older shu, from around 7 or 8 years old and then on, but feel improves, and there's something hard to describe about how it all balances differently.

Those other two version flavor descriptions imply how this could be better; shu flavor profiles can vary in lots of ways, and preference would dictate what works best.  It's all typically variation within a narrower range than for sheng, by quite a bit, and they give up some overall complexity, but shu versions can still be interesting and pleasant, as this was.


I wrote about doing comparison tastings not so long ago; a version sold like this is perfect for use in such comparisons.  Those loose teas work out about the same, since you can keep trying them from 100 gram package size (50 isn't enough--it's crazy to buy $4.50 worth of such a tea and then run out after trying it once in awhile for a month or two).  Comparing these, along with a cake version, would really help place those factors I've been describing:  flavor differences, difference in feel, sweetness, overall balance, aftertaste range, etc.

It's worth noting that varying single serving presentations have become popular, based on the form being reinvented by modern Western facing vendors.  This version is probably pretty close to what I just reviewed, a shu pu'er from White 2 Tea, 2018 FLAPJACKS RIPE PUER:


Each flap jack is roughly 7 grams, with 7 flapjacks in each short stack.


This blend of ripe Puer is suitable for any style of brewing. It has a sweet flavor and inviting fragrance that make it a solid daily drinker for new and veteran Puer drinkers alike. Soothing and smooth, a lovely ripe blend. The easy to steep shape makes it an ideal tea to grab on the go.


Those cost 80 cents apiece versus the small bars 65; not so different.  There's a decent chance the tea grade and complexity is more moderate, but an equal chance they're on par for quality, or could conceivably be better.  Tasting both versions is the only way to know.