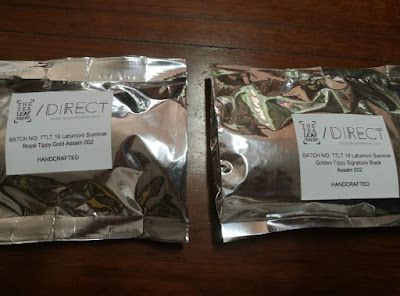 I'm comparing two of the better looking Assam versions I've ran across, supplied by the Tea Leaf Theory for review.  Of course the proof of the pudding is in the eating; we'll see how they are brewed.  I wrote about a couple of other teas from them in this post; those were great, one Darjeeling and one from Arunachal Pradesh, not far from Assam but not Assam, as I remember.  I'd meant to include more pictures Upamanyu sent of tea plants growing or processing, and didn't get to that, but there are plenty in their Instagram profile.

I tried the best Assam I've probably ever had not so many months ago, two versions from Oiirabot.  In a way that judgement is odd because I liked them for seeming more like Chinese black tea than any Assam I've ever tried, and there's nothing wrong with more conventional Assam style, I like that too.  Some versions I've tried that fall within that range have been really nice.  I just prefer Chinese black teas, as a personal favorite.  To some extent I'd have to reconsider that if these were that good but back towards more conventional style forms.

There is no pricing on the Tea Leaf Theory site, or specific product descriptions, so I won't be addressing any of that, but this seems to be a description of this source:

It was during the early 90s when the tea plantation rule became liberal and small private farmers were allowed to grow tea plants to sell green leaves to the large factories, Late Mr Ramesh along with his son Mr Sailen took to tea plantation in a small patch of land measuring around 2 acres. Today Mr Sailen adopts natural & sustainable cultivation methods passed on through generations and have been able to set up a micro tea processing unit which as also serves as our experimental station to research on different tea productions. Some of the finest crafts from Assam comes from this farm.

I'll brew these Gongfu style, even though that's definitely a judgement call.  It's what I'm most used to, and I'm familiar with how the range of difference between the approaches tends to go, even though results vary for that.  It's not completely different.  I'll keep the proportion somewhat moderate and use longer infusion times than I do for sheng pu'er, for which I pack out the gaiwan and tend to go with 5 to 8 second brew times.


Lautomi Summer Royal Tippy Gold Assam, batch number TTLT 19:  this has some of the longest twisted leaves of any Assam version I've tried, as does the other version.  It's definitely orthodox tea.

The flavor is nice, malty, complex, and sweet.  It tastes like good Assam.  The astringency gives it some structure and feel but it's not astringent.  Beyond malt it includes cocoa and other range that might be interpreted in a range of different ways.  To me it tastes like warm, rich floral tone and a bit of dried fruit, towards dried persimmon.  I'll describe feel difference and work on that flavor breakdown over the following infusions.

This is less dry, a bit deeper in tone and sweeter.  Preference for style and aspects is something of a judgement call but I think I like it better.  Cocoa stands out more, and flavors are even deeper and richer.  There is warm mineral supporting what would probably be interpreted as fruit and floral, or maybe just one of those, depending on interpretation.

Level of malt is a bit lower, the balance of that input.  It's not the harsh form of malt that occurs in CTC teas, to be clear, not paired with a sharp astringency, not overwhelming related to the rest of the flavor profile.  Relation to that flavor and more typical feel would probably determine which of these two versions is better, per this early take.

The first version is still soft, not dry and astringent, but a higher level of structure and more malt make it more typical for Assam, per my own past experiences.  It doesn't really work to say the second is like Chinese black teas but the style overlaps in some range; it's more like them.  It may well be that the other Assam versions I'd mentioned that seemed that much closer to Chinese tea style may have been made from different plant types; that would make sense, related to the results. 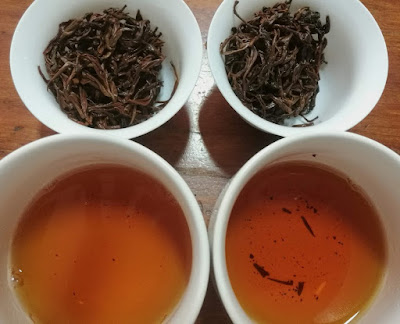 Royal Tippy Gold:  this round is brewed a lot lighter, for around 10 seconds instead of longer, checking out how that changes things.  The feel softens in this, and warmth picks up.  It tastes even more like cocoa this round.  Maybe that was coming anyway, just how it was going to transition, separate from a difference in infusion strength.  A lot of complexity supports that, as described in the first round, but beyond that relative aspect level shift and feel softening it's unchanged.


Golden Tippy:  this is a bit light made this way, perhaps just under optimum related to that.  The feel still has a lot of thickness, and even a more subtle flavor is pleasant and full.  The first tea is like cocoa related to the scent of dried cocoa powder, this is more like dark chocolate.

The first version doesn't seem dry at all when you taste it alone but in comparison with this second version that stands out more, both a feel aspect and a mineral undertone (flavor) that seems related. Supporting flavor range for both isn't completely separate but the effect and balance is quite different.  Again warm, rich floral and dried fruit describe both, but a clearer, more complete breakdown would vary.  To me malt is a minor supporting aspect in the second but more on par with the cocoa in the first. 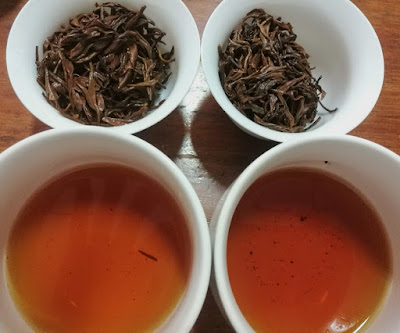 Royal Tippy Gold:  this tea is really nice; that might be getting lost in this description.  For a tippier version of Assam it really couldn't get much better than this.  That bit of dryness is just how the style of the type goes, along with malt as a main flavor.  Complexity based around cocoa and other range in this case isn't atypical but this is well above average for complexity.  Take that input for what it's worth; I've tried some Assam over the past year, and more over the last 3 or 4, but I've been focusing on other tea types a lot more.


Golden Tippy:  aspects transition, which in part would relate to brewing this stronger, well over 10 seconds (more like 15), versus that shorter time frame last round.  It's not just feel or intensity that changes when you brew a tea to a different intensity, the aspects that stand out most and how you interpret them also shifts.  It surely must be possible to identify character and flaws in teas overbrewed (per a normal preference optimum) using the standard ISO / typical tasting approach, brewing tea for 5 minutes at significant proportion.  But surely some of what I was just talking about must get missed, the range of what is possible to "get out of" a tea, how it comes across within a narrow but varied range of more optimum preparations.

Malt picks up slightly, cocoa (dark chocolate) fades, and background aspects transition towards a wood tone, away from rich floral and dried fruit.  I suppose all of that is more negative than positive, but to some extent it's also just different.  It's still quite pleasant. 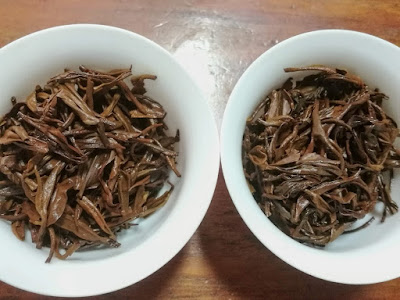 
This will have to wrap up soon due to the typical deadline of heading out to a standard Sunday morning swim class.

Golden Tippy:  it's interesting the way that the slightly dry structure in the first contrasts the softer, richer, more subtle feel in this version.  Per some acclimation and preference the first version might already be too soft, it might lack enough astringency structure.  I like the feel of the second better, but it's my impression that it's only a matter of preference, not an objective call.  I like the flavor depth of the second better, versus emphasis on just malt with some cocoa in the first, even though it is more subtle.

That fruit and floral background I mentioned in the early rounds never did completely fade or develop enough to be easy to describe better.  The general effect was that flavors were complex, that there was more going on, but what that was never became easy to isolate, beyond the malt and cocoa / chocolate.  Wood tones stand out a bit in the second most now, in the cured hardwood range as that goes (versus greener wood, tree bark, autumn leaf, etc.).

On the next round (fifth) the flavor of the first (Royal Tippy Gold) reminded me a bit of tobacco, a rich, sweet, aromatic version of it.  The malt, cocoa, and feel, that touch of dryness, are all in an even better balance than in earlier rounds; nice when it works out like that.  The Golden Tippy version is still quite pleasant, although picking up wood tone wouldn't be positive for everyone.  I liked the earlier background touch of fruit and floral range better but it's still nice, to me.

These teas aren't finished; made like this they'll produce another 3 or 4 positive infusions.  How they transition in late rounds is an interesting part of the experience, but it's usually a case of either that staying very positive or trailing more into wood tones, and diminishing in complexity.  A positive flavor transition in late rounds can occur, something new showing up that wasn't present, but that's not usually how it goes.


I don't have much to add to all that, I can just try to place these in relation to what else I've tried.  I did like the Oiirabot versions better, but as mentioned that was because they didn't seem like standard Assam to me, closer to typical of Chinese black tea style.  For being typical Assam style tea (good orthodox versions of it) these are surely as good as anything I've ever tried, quite possibly the best versions.  It was interesting trying two closely related but different versions as I did, and really that general description and quality judgement applies to both.

It's odd not rambling on more.  For reviewing sheng so much lately I always go on and on about aging and storage concerns, value judgments, and style observations related to any number of factors.  This was just quite good tea, familiar in style range, type-typical, but better than those almost ever are.

If someone wanted to try benchmark best-case versions of Assam style black tea styles these two would work well for that.  It's not unusual for astringency and that touch of dryness in the tippier version to be even more pronounced, or level of malt to be higher, or for versions to include a touch of citrus, which these kind of didn't.  Beyond all that this is just what really good Assam is like.

One might wonder how these would be different in a Spring version, about the "flush" or season issue related to these teas.  I could add a lot more about that but since it's a much less familiar concern in relation to how that tends to go in Darjeeling it's probably best not to.  It seems possible that Spring versions could be slightly different, perhaps even better, maybe slightly more intense, with a bit more light floral aspect standing out versus the slightly richer, heavier flavors in these.  That's really essentially a guess though, and not a very reliable one at that.