Breaking from normal form I wrote the review notes for this prior to doing any intro section, and talked a little to the Hatvala owner about those teas first too.  These were provided for review; many thanks for that.

I'd lost track of the idea that these are both variety Assamica based oolongs, which is quite novel.  I remember trying an Oriental Beauty version made from Assamica and not much else comes to mind, beyond the Indian versions, which are sort of something else, more less-oxidized versions of black teas.  A Halmari Assam version was great, it just seemed nothing like a Chinese or Taiwanese oolong, a lot closer to a second flush Darjeeling.

They're both quite nice teas; I usually don't know that when writing the intro section.  I'll mostly just cite the web-page descriptions here though, getting back to descriptions and conclusion later.

Sun Bear Oolong Tea is one of two experimental Oolongs produced from the leaves of wild large leaf tea trees collected from Cho Long in the Yen Chau district of Son La province.  Yen Chau lies between Moc Chau, where the tea is processed, and the Vietnam/ Lao border.  The tea is processed by an expert Oolong Tea producer.

Sun Bear Oolong Tea is produced from one bud and two leaves with an oxidation level similar to that of the farm grown Red Buffalo.  After rolling and drying the tea is subject to a short roasting phase.  Sun Bear feels a little creamy in the mouth and offers flavours that include aniseed, fennel and a sweet, nutty taste that is similar to cooked cassava (or 5 bean powder if you are familiar with that). The depth of character found in deep rooted, broad leafed, ancient tree leaves allows the tea to be infused up to 4 or 5 times without losing flavour.

The sun bear is the smallest of the bear species and is native to the tropical forests of South East Asia (including Vietnam).  It is listed as vulnerable due to large scale deforestation in recent years.  Sun Bears are also threatened by commercial hunting, both for meat and traditional medicine.  At Hatvala we are sponsoring the rescue work of Animals Asia at their Bear Sanctuary in Tam Dao National Park.

Moon Bear Oolong Tea is produced from one bud and two leaves harvested from wild large leafed trees. It is oxidized to a higher degree than both the Sun Bear Oolong and the farm grown Red Buffalo. Moon Bear does not have a separate roasting phase at the end of rolling and drying. It produces a full bodied amber liquor with a pleasant bitterness, subtle astringency and a delightful range of flavours encompassing dried rose, golden syrup, herbal or medicinal notes and a little toastiness in later infusions.  The depth of character in the broad leafed, ancient tree leaves allows this tea to be infused up to 5 or 6 times without losing flavour.

Moon Bear Oolong Tea is another of two experimental Oolongs produced from the leaves of wild tea trees harvested from Cho Long in the Yen Chau district of Son La province. Yen Chau lies between Moc Chau (where the tea is processed) and the Vietnam/ Lao border...


My review notes have them a lot closer in character than those aspects lists do, and the interpretation varies, but that's all normal enough.  To cite a typical example I picked up no bitterness in the Moon Bear version at all.  Then again I've been drinking mostly sheng for two years, and an average level of bitterness in young sheng is a lot higher than in this tea version.  I might describe a sheng as "not bitter" when it includes more bitterness than any oolongs ever tend to.

Now that I think of it I'm way off being calibrated for interpreting rolled oolongs.  I've been drinking some of a cheap Tie Kuan Yin I bought in China at work but I've not reviewed better versions here for awhile, maybe only one this year.  That was a roasted Tie Kuan Yin from Jip Eu, a local shop I make it to often.  Odd, since that was my main starting point for better teas, exploring Thai rolled oolongs (which in retrospect aren't usually exceptional).

Sun Bear:  it's not fully opened yet but clear enough where it's headed.  It's a more oxidized, probably somewhat roasted rolled oolong, although no particular level of roast comes across.  [Very moderately roasted, per the description.]  That would be comparable to their Red Buffalo oolong, which I haven't tried in awhile, so it will be hard to do aspect comparison by memory.  The flavors are nice, and though those will develop further.  The main aspect that comes across is that of toasted pastry.  From there a mild spice might develop more; we'll see.

Moon Bear:  this overlaps a little but it's different.  Toasted pastry works as a description for part of the range but it's a little more towards a root-like aspect.  Usually I'm referring to that as root spice, but in this case maybe just non-distinct root, what that range is typically like, or maybe not far off the smell you would pick up by sniffing potatoes and yams in a grocery store, especially if they were wet.  It sounds less pleasant, but the way that sweeps in an interesting underlying (or in this case primary) mineral tone has a lot of promise.  Sweetness and floral and fruit or whatever else will probably pick up to balance that, since this is just getting started. 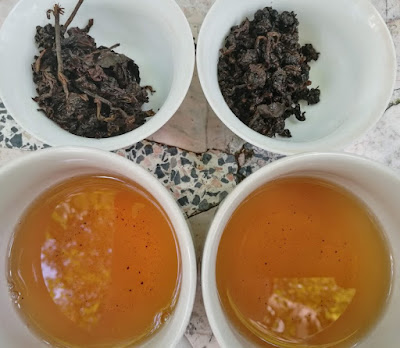 Sun bear:  mineral and earthy tone pick up in this; it approaches the other in character.  I love oolongs in this range, versions that tend to be called "red oolongs," even though that terminology doesn't make perfect sense to me.  It only means "more oxidized," so the intention and final meaning couldn't be clearer, I just don't relate well to black teas being called red.  It has more to do with how someone prefers language to be used than it being right or wrong, clear or unclear.  I'm fine with conventions evolving however they happen to, with a tea type being named after a village, for example, even when it comes from a much broader area, or the British screwing up the name for black / red tea at one point.

It's interesting how this balances.  It has enough sweetness to be pleasant, but a bit more would completely change the effect.  Mineral related to wet potato definitely joins the toasted pastry flavor, with that trace of spice not picking up much, at least yet.  The overall effect is nice, clean and balanced.  Feel has some thickness, I've just been spoiled by really structured teas that express very long aftertaste effects for awhile, so it all seems moderate to me.

Moon bear:  this shifts a little into cocoa.  It's even less sweet, which makes the mineral (root) part stand out a lot more; that shifts the perception and placement of the same aspect.  Add a little more sweetness and I think it would seem like cocoa is dominant.  Again the balance is nice, and the cleanness of the flavor aspect.  The tea is smooth with reasonable thickness. 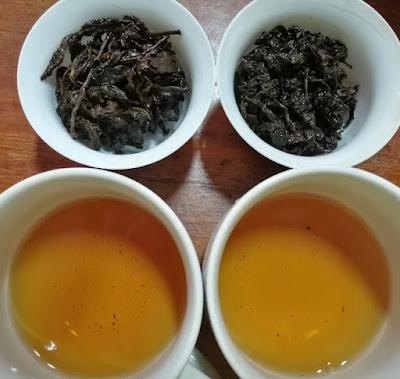 Sun Bear:  more of the same really; no difference related to transition.  As I remember a mild version of malt, more like malted milk balls, is present in the Red Buffalo version, and stands out, and this also includes that.

Moon bear:  these have drawn to be relatively close to each other.  Some of the same aspects must be in a slightly different balance, and there must be supporting aspects that vary, traces of this or that, but they're pretty close, at least at this point in an infusion cycle.  This evolves a little towards a mild woodiness, close to balsa wood, which is how I remember part of Red Buffalo as well.  I had went a little lighter on this infusion (round); I'll try it slightly stronger and see if that points out differences better.


Sun Bear:  I had already mentioned it but this flavor profile is really clean for being in this range.  It doesn't take much for a touch of mustiness, woodiness, or some other earthy range to disrupt this given the heavy, somewhat earthy flavors at play.  This is quite clean.  Toasted pastry still stands out, a lot more than the mineral, which works as a base.  A trace of cinnamon joins that.  A bit of raisin would be perfect, matching one of my favorite pastry types, and with the right degree of imagination one could see it as there.  Sweetness isn't as pronounced as it might be but it gives it good balance.

Moon Bear:  Spice stands out a little more than any toasted pastry aspect, also closest to cinnamon, but it's non-distinct enough that it could be nutmeg instead.  Making that swap is the main difference between these, with spice range more pronounced than toasted pastry.  Mineral range has dropped off.  That malted-milk ball trace is stronger in this version than the other. 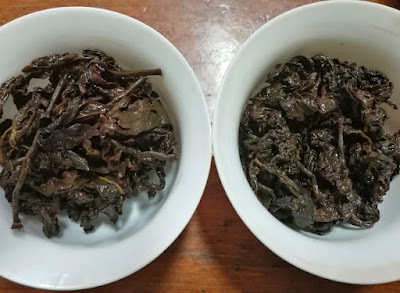 
Sun Bear:  some other spice aspect seems to be picking up, not one I can define though.

Moon Bear:  not as much transition in this version, at least for this round.


I did try these for a few more infusions but they were fading past that point.  The Moon Bear held up better in late steeps, picking up a nice roasted chestnut aspect, while the other just faded more.  Both were quite pleasant even when stretching them though, clean and balanced throughout.


They're not that far off their popular Red Buffalo version in character.  Both seem like more-oxidized oolongs, not at all like partly oxidized black teas.  They lack some of the sweetness and a little of the full, round feel oolongs tend to express, but beyond that they're normal for the general range.  There is no clear narrow aspect set for more-oxidized oolongs to be shooting for so these seemed type-typical enough.

It probably would've helped with interpreting them if I'd been drinking just a little more roasted oolong over the course of this year, versus that one example back at the beginning of it.  Not rushing to beat the Sunday morning swim class timing would've worked better, but that's a given as the tastings go.  Interpretations would naturally vary anyway; one person's rich root spice and warm mineral would be another's roasted chestnut.

Related to not interpreting them as sweet that probably ties to bias related to other types too.  I drink mostly sheng and black teas now, both of which can come across as very sweet in different ways.  By chance I've tried two of the sweetest green teas I've ever experienced in the last week.  That particular aspect layers in with others in these teas' examples, and it was enough to provide a nice balance.

They're by far the best Assamica based oolong I've ever tried, but that's not saying much, given the limited prior exposure.  With that consideration these are interesting for novelty, but they stand on their own for pleasant character well enough without that as a factor. 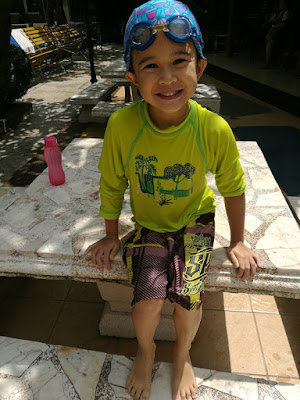 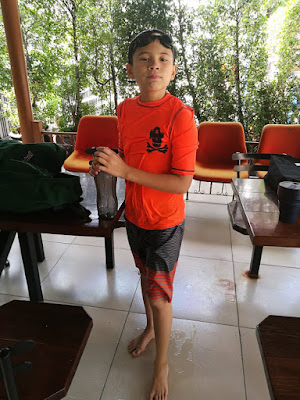