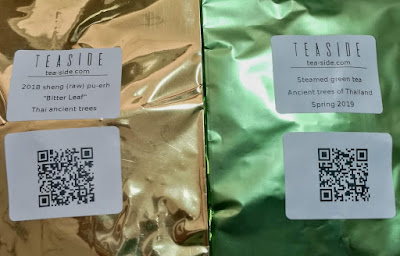 These two teas don't pair as closely in style as they might, following my own convention of trying very similar teas together, but it should work.  I just started dabbling in green tea again, and beyond adjustment for brewing temperature difference the character won't be completely separate.

It might be closer if this was a pan-fried green, versus being steamed, processed as sheng and Longjing green teas are instead of the main heating approach used for Japanese teas.  That difference should be interesting though, [as it turns out it was, since the green tea was nothing I would've expected].

This sheng does not resemble Bulang, nor Lao Man Er, nor other Chinese regions. But that is how I describe the organoleptic properties... The bitterness is so edible, soft. Without citrus notes - closer to the fragrant fresh wormwood. Now, if we add more sweet wildflowers and a drop of vanilla to this fragrant bitterness, then we get this sheng.

Many puerh producers seek to collect the harvest from sweet trees. And we, of course, understand them in this - everyone loves sweet tea, it is easy to sell, etc. But we are convinced that bitter-leaf pu-erh is seriously undervalued for two main reasons:

It has a powerful fragrant Huygan. That is not just a returning sweetness but a very fragrant sweet aftertaste.  It has a very potent relaxing and sedative Qi effect...


This is being sold for $70 for a 200 gram cake, so presented as above average quality tea related to the pricing.

For this tea, we used Japanese traditional technology for steamed green tea but adapted it to the specifics of the material from old trees. It took several experiments to figure out the optimum steaming depth in order to remove the astringency of a powerful pu-erh leaf but to preserve the freshness and aroma of light and delicate green tea...

The aroma is sweet, appleish and floral. On the palate is a beautiful, whole and full-bodied mix of fruity-floral tropical notes. In the foreground are apples, plumeria and a bouquet of garden flowers. The finish is sweet and oily. The infusion is light, transparent, with a light green tint.


Sounds good; we'll see.  I never do add or read these vendor descriptions until the editing step, and giving this a quick scan later that sounds about right, essentially how I described it.

This tea version sells for $10 for 50 grams; reasonable enough if it really is a novel and high quality version of green tea.


2018 "bitterleaf" ancient tree Thai sheng:  this definitely does have some bitterness to it; it's just getting started and it could already pass for a good version of Myanmar sheng.  The tree / plant types there must vary, because although most I've tried were on the bitter side the last sheng that I tried from Kokang wasn't.  This tea is pleasant; bitterness stands out but sweetness balances that.  Flavors are clean and feel has some thickness to it.  That range might even include some dried fruit.  Waiting a round for a more complete break-down makes sense.

2019 Spring 2019 steamed green from ancient trees in Thailand:  I didn't expect that to be like Japanese green teas, and it's not, but I also didn't expect how it is.  The flavors are warm and floral, with a bit of dried fruit supporting that, along the line of dried persimmon or even peach.  So much for concern over this being overly vegetal.

Green teas are never rich and warm in flavor and tone like this.  From the color it doesn't look like they've let it oxidize to warm the tone and shift character; it turned out that way via other causes.  Feel is on the soft side but with pretty good fullness.  It gives up aftertaste range in comparison with the sheng, but then that's how that would go. 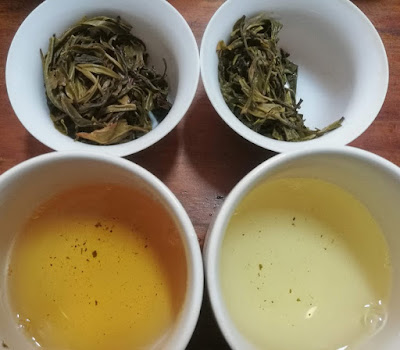 2018 bitterleaf Thai sheng:  flavor warms a little. The bitterness is really nice, paired with a lot of residual sweetness.  Astringency isn't part of that; the feel is full and rich but not rough in any way.  It's just bitter.  Mineral undertones support that, warm versions of them, and subtle floral range rounds out the experience, trailing over into mild dried fruit range.  At some point splitting out flavor range over different levels gets to be guesswork and imagination, but to go there the fruit covers hints of nectarine and tangerine.

2019 steamed Thai green:  I really didn't expect this to stand up to the other tea as well, to be anywhere near as pleasant, on a few different levels.  Of course bitterness, feel, and aftertaste aren't comparable but the flavor range is great, the feel isn't thin at all, and overall experience complexity is good.  It's not vegetal, not grassy, like vegetables, and so on.  A faint trace of bitterness and some degree of residual sweetness adds complexity; both are more typical of sheng range, and not as pronounced as in this other sheng version, but they match up well against more modest quality sheng version character.  Warm mineral plays more of a role in this infusion, and it does seem to be swapping out some floral and fruit range for wood tone or mild vegetable, more like tree branch bud at this point. 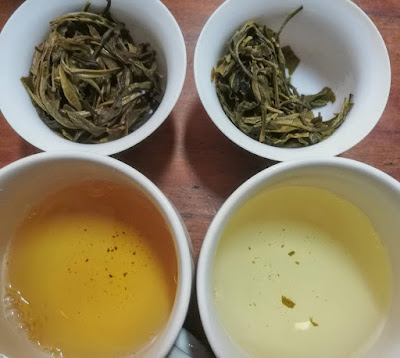 2018 sheng:  I've been giving this around a 10 second infusion, based on also brewing the other version at the same time.  At this proportion it would work well faster too, using 6 seconds or so, not quite a flash infusion but a quick one.  It's not bad like this but there's more than enough intensity, so it just depends on preference for that level.

Lighter probably would be better.  Bitterness is still pleasant but it is a little strong.  The warm supporting tones, covering underlying mineral range, floral tones, and dried fruit, are pleasant, but the overall balance would probably work better quite light.  This might be shifting from dried fruit to include more wood tone as well, cured hardwood or something such, or closer to tree bark, maybe even a little towards tobacco.  It will be easier to split that out using a lighter infusion.

2019 steamed Thai green:  the overall effect isn't coming across in describing flavor as a list.  It's a bit creamy, with an interesting rich, full character.  Warm floral along the line of rose petal stands out now, with warm fruit range still around dried persimmon.  There is still a touch of flavor edge and mild astringency along the lines of tree bud tip or flower petal or stem, but not much, so it works to give it balance.  Sweetness level is nice; it balances all that.


2018 "bitterleaf" Thai sheng:  this is still bitter and plenty intense but it does balance better brewed faster, using a 5-6 second infusion time.  It's still cool the way that sweetness kicks in while you still drink the tea, and gets a lot stronger after you swallow it.  This has about as much residual sweetness (hui gan) as sheng ever tends to.  Other supporting range is still transitioning a little but not too far off where it was in the last round, mixing earlier floral and fruit flavors in with developing warm wood tone, probably closest to tree bark.

2019 steamed Thai green:  this hasn't transitioned much.  Maybe that rose petal floral tone is really closer to lavender, which could relate to me getting it wrong earlier instead of that changing.  Lavender tends to have a strong, rich, sweet smell, even when the scent isn't strong, and this is like that.  Again including some bitterness and trailing aftertaste gives this nice complexity.  It has less feel structure than the sheng while you drink it; it feels a little full but not in the same way. 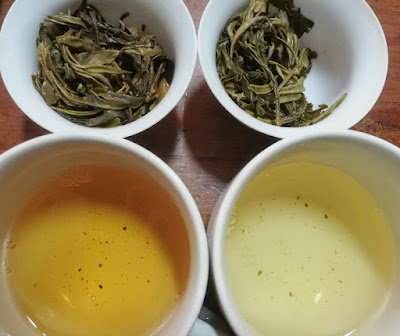 2018 "bitterleaf" Thai sheng:  not too much transition to speak of; the balance of earlier aspects may be shifting a little, but not in any way that changes much.  Bitterness might be tapering off just a little, with other range filling in more, balancing against that more.  Again a wood tone is picking up, more even in level against floral and other flavor range.

2019 steamed Thai green:  it's nice how this is working out well being brewed using parameters pretty close to those for sheng.  I'm using slightly cooler water, nowhere near 70 C, probably closer to what the parameter tables list for oolong brewing, 85.  Given this feel is soft, with just a touch of astringency edge, it would probably still be fine brewed just off boiling point, or even at it.  I don't think it would be better, or probably as good, but it seems likely that would work.

This hasn't changed much either.  Creaminess is really nice, along with rich, sweet flavor complexity.  Floral tone stands out the most but it would work to interpret part of the brighter note as a hint of citrus, probably closest to tangerine.  Most of the flavor range is warmer and richer, but that brighter range contributes too, giving it nice complexity.  That may be what green teas tend to lack, beyond tasting vegetal, like grass or vegetables; they usually don't cover this range of complexity, for flavors or feel aspects, or including as much trailing sweetness aftertaste as this does.  A lot of sheng drinkers would like this better if some of the bitterness in the other sheng version added to all that, but that is subjective.


The next infusion wasn't so different (the sixth); I'll skip the separate description.  Bitterness drops off in the sheng, and picks up in the green tea version, seemingly a function of going longer on the infusion time.  The green is finally picking up just a trace of vegetable tone, along the line of kale.  From here more of that will occur, as infusion times run longer to keep up intensity aspect proportions will shift as a result.  Both teas are still quite pleasant but not quite as nice as in the earlier cycle.


In trying a Longjing from Yunnan recently I was surprised that it included so much intensity, complexity, and sweetness, as this green tea version also did.  That tea started out with more of the characteristic nutty / toasted rice flavor aspect, then shifted more to floral, mineral undertone, and other flavor, much closer to this version.  Both were as good as any green teas I've yet to try, lacking the vegetable range flavors and astringency that I don't care for in green teas.  This version was probably a little more novel, not quite as intense in flavor but with more unusual character, with a lot going on.  This might be the fruitiest green tea I've tried, and possibly the creamiest in feel.

This sheng was nice.  Bitterness did stand out, matching the billing.  Astringency didn't, at all; interesting it could be that bitter without including much of that.  Feel structure was more complex than in the green tea version though, with good trailing sweetness in both, but a much stronger related effect in the sheng.  This sheng was a relatively high quality version, but the novel character stood out more than that.  Bitterness in young sheng is normal; that particular form of bitterness and the aspect range coupled with it is not.

It was interesting that the color showed as much aging as it did for the sheng, but then a year and a half enables more transition here in Thailand than in cooler, dryer climates.